12 Interesting Facts About River Nile. The most important river for human civilisation

While Egyptian civilisation is regarded as the springboard for our current human civilisation, the river Nile is believed to have played a crucial role in the development of ancient Egypt.

Beyond sustaining the life of Egyptians, the waters of the Nile and their fertile soils lead to agriculture and trade that has advanced human life immeasurably.

In this article, we'll take a look at some interesting things about the river, Nile.

River Nile's has very diverse origins dating from the days of ancient Egypt. In ancient Egypt, it was referred to as "Iteru" which simply means river while the ancient Nubians called it "the great water".

In Greek mythology, Nilus is the god of the Nile river itself. In most ancient cultures in Eastern and Nothern Africa, the original name is either river or simply water.

2. How Long Is River Nile

From Lake Victoria in Uganda to Alexandria in Egypt where the Nile empties into the Mediterranean sea, the Nile covers a distance of 6,650 kilometres or 4,130 miles.

It would take more than 80 hours of nonstop driving to cover the same distance at 80 km/h.

3. Is River Nile Longer Than Amazon?

Historically the Nile has been described as the longest river in the world but some sources argue that it is the Amazon river.

The length of rivers is hard to measure especially when it comes to locating a source and mouth (ending point). This is why some studies say that the amazon is longer and others insist that the Nile is longer.

The Nile is still regarded as the longest river in the world.

4. Where Does River Nile Start

The source of a river is hard to determine, and there are several points of view. An exploration party in 2010 determined that the actual source of the Nile is the Rukarara river in southern Rwanda. Other sources say that the Luvironza River in Tanzania is the source. 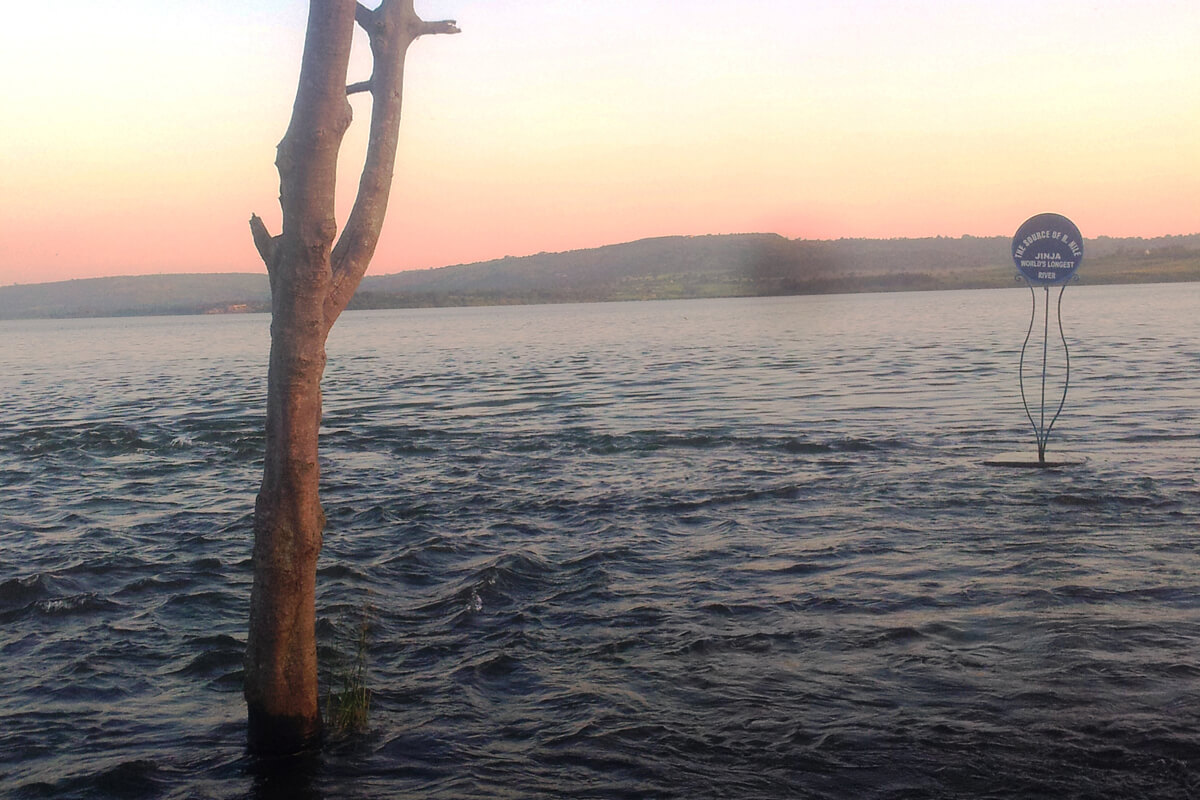 Traditionally, the source of the Nile has been thought of as Jinja in Uganda where the Nile leaves lake Victoria.

The theory for Rwanda and Tanzania is based on the furthest source of water that ends up in the Nile while the argument for Jinja is based on the point at which the River is actually called the Nile.

5. Where Does The Nile Flow Into

The Nile flow into the Mediterranean sea at Alexandria in Egypt. River Nile has 2 major tributaries, White Nile from Jinja Uganda, and the Blue Nile from Ethiopia's Lake Tana.

6. Which Countries Are Crossed By The Nile 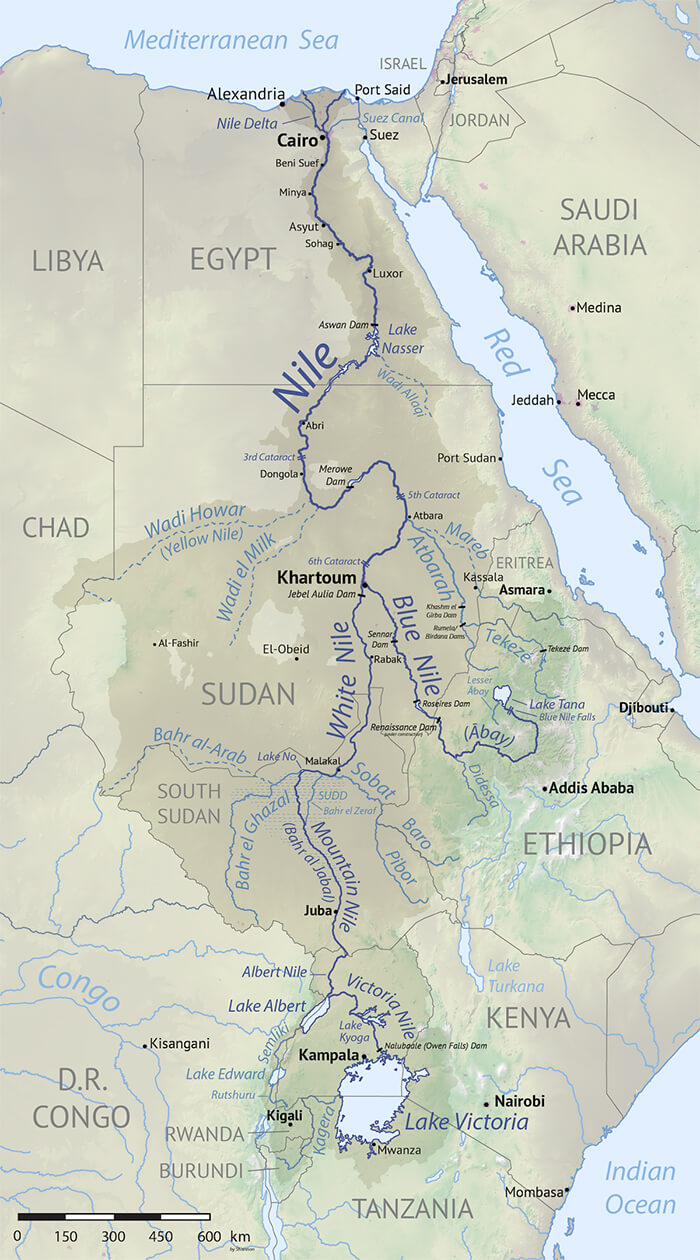 The following countries are Strictly crossed by the Nile river, and the 2 major tributaries. Uganda, South Sudan, Ethiopia, Sudan, Egypt.

7. Who Discovered The Nile?

The first European to discover the source of the River Nile at Jinja, Lake Victoria was British explorer John Hanning Speke in 1858.

Since the 14th century, Europeans had been trying to find the source of the great river but couldn't go past the sudd wetlands of South Sudan.

While the source of the Nile was hidden from the world for so long, the locals in South Sudan and Uganda had been relying on it for fishing, and transport for millennia.

8. Why Is The River Nile Famous?

River Nile's popularity is because of its undeniable role in human civilisation. Without the river Nile, it is hard to imagine ancient Egyptian civilisation and the change it led to all over the world.

Through the centuries that saw the rise and fall of Egyptians, Greeks, Romans, Turks and Arabs, the source of the Nile had always been a mystery. The importance of the river to Egypt and Sudan was well understood but the source had remained a mystery.

9. Who Owns The Nile

According to a treaty drawn by the British in 1959, Both Egypt and Sudan have formal entitlement to the river's flow and the other upstream countries have no such entitlement.

The Nile is the lifeblood of both Sudan and Egypt and that treaty was intended to make sure the two countries are not cut off from the supply of water. In both Sudan and Egypt, the biggest part of the population lives around the Nile and depend on it for their livelihood.

Besides the hydro-politics of the treaty, every country owns its part of the Nile and can use it within the bounds of the treaty - not deny other people the water.

10. Are There Animals In River Nile?

In the many environments it passes, the Nile is home to many animals and a source of fresh drinking water for much more. 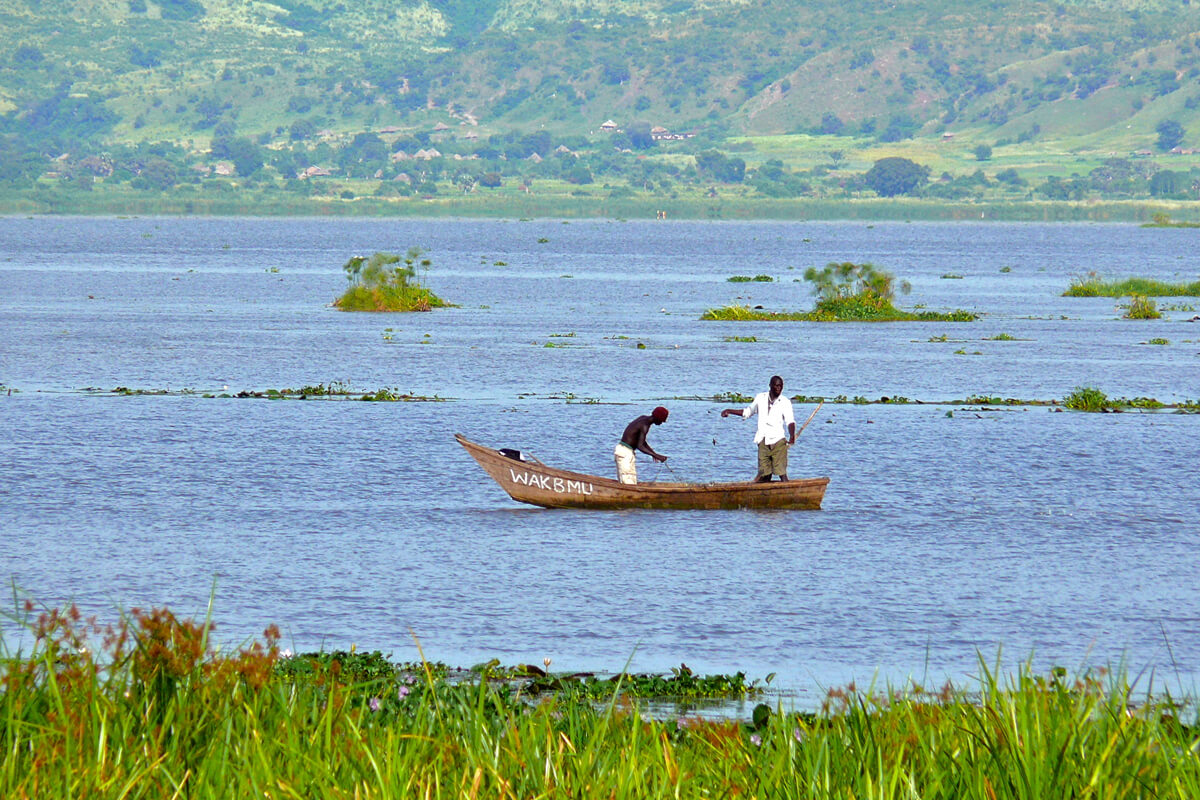 Aside from fishes, many crocodiles and hippos spent a lot of time in the river while the banks of the Nile are home to many birds, reptiles, and big mammals such as elephants and buffaloes.

If you want to see animals in the Nile, the upstream countries are where you will find parts of the river not surrounded by human settlements. Uganda, Ethiopia and South Sudan are good options for seeing the birds and animals of the Nile in a wild setting.

11. Does The Nile River Freeze Over?

The river Nile has never been frozen over in all of known history. The reason for this is the climate of the area.

The river starts in areas that are near the equator and goes north to the desert areas of Sudan and Egypt. The whole Nile basin is in the tropics and receives sunshine all year round and the temperatures are always warm.

In certain sections of the Nile, you can swim in the water and you will be safe from both the current and other animals. In some areas, the river has rapids and the water moves at high speeds that would be unsafe for swimming.

Another concern for swimming in the Nile is wild animals - especially hippos and Nile crocodiles. This is especially in the wildlife national park where these animals spend their days underwater.

Whether the Nile is the longest river or not, its biggest impact was giving all of us Egypt. Egyptian civilisation pushed humans forward and formed a great basis for all the other things we have done.

The Greek historian Herodotus wrote that "Egypt was the gift of the Nile", if he was around, he would probably say that life as we know it now is a gift of the Nile. That is the real appeal of the Nile and its waters.

If you happen to be going to any of the countries crossed by the Nile, we hope you can do some activities on the river and have your own intimate life-changing moment with the Nile.