Facts about Rhinos. Facts about the Horn, Skin, social habits and more.

The word Rhinoceros comes from the Greek word "rhinokeros" which loosely translates to 'Nose Horned'. The name is perfectly descriptive as that is how we all identify and think about rhinoceros. 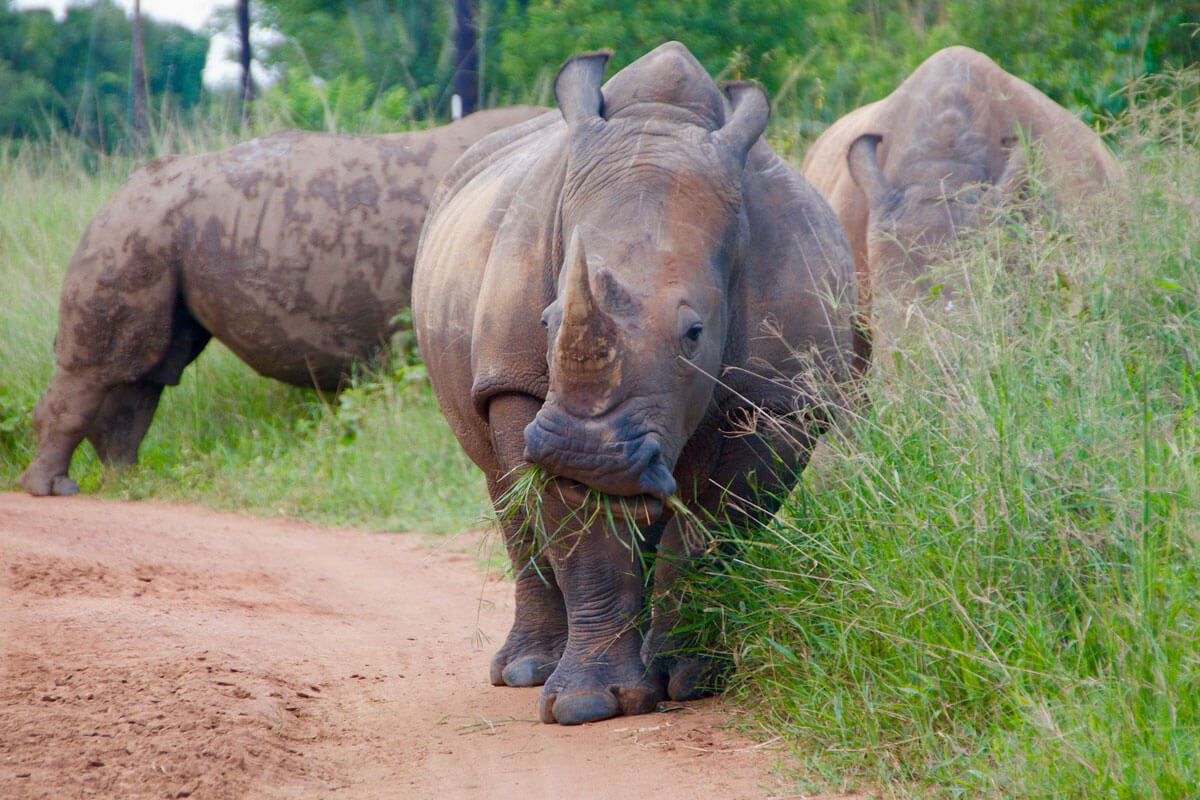 There are 5 existing rhino species - 2 native to Africa and the other 3 natives to Asia. The African Rhino species are the Black rhinoceros and the White rhinoceros.

In this article, we'll look at some interesting facts and characteristics that make rhinos incredible animals. While most characteristics cut across all the rhino species, we will tend to focus more on the rhinos found in Africa. 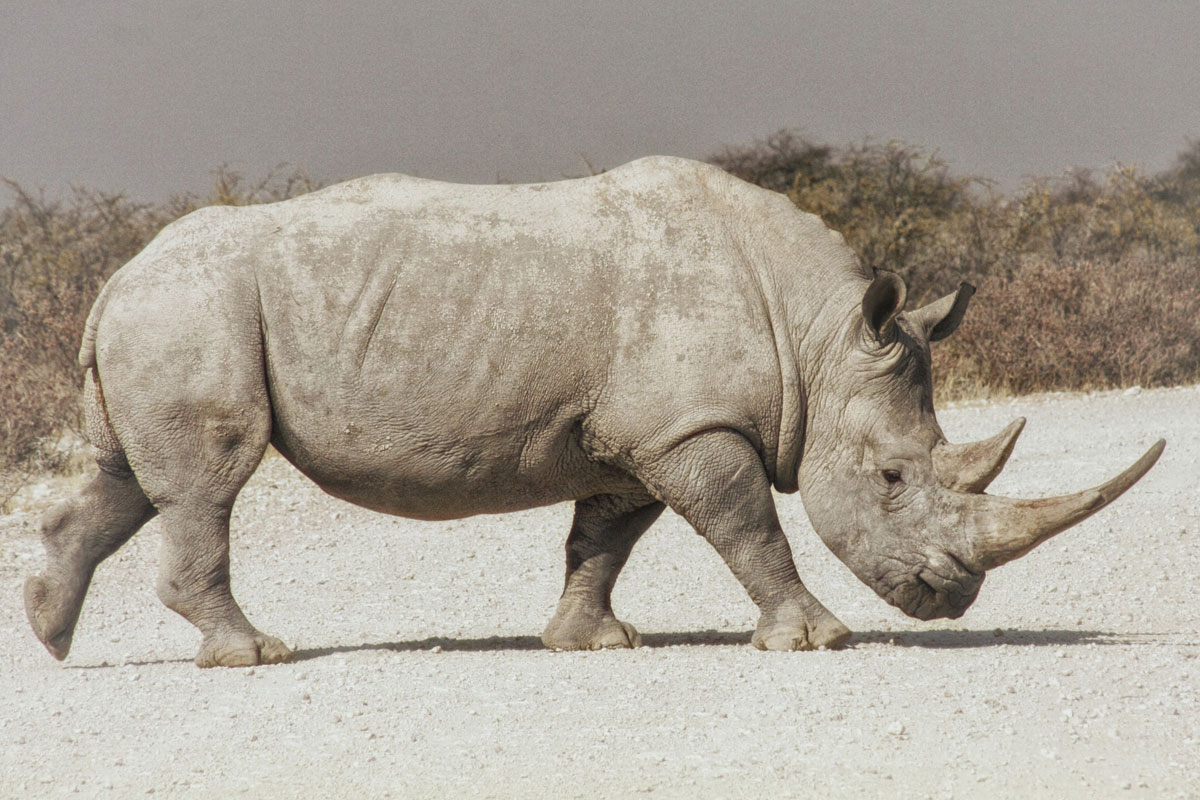 A rhinoceros is the 2nd largest land animal after the African Elephant. The White Rhinoceros found in Africa is the biggest of the remaining rhino species.

A rhino can grow up to a size of 4.6 meters in length (from head to tail), and 2 meters tall at the shoulder. For context, a landrover defender 110 measures the around same length and height.

2. How Much Does A Rhino Weigh?

Rhinos are the second heaviest land animal and can weigh up to 2400 kilograms. All the remaining species of rhinoceros weigh more than 1 tonne (1,000 kilograms). Female rhinos are smaller and weigh up to 1600 kilograms.

These are the recorded average maximum size for adult white rhinos which is the largest of the rhinoceros species. 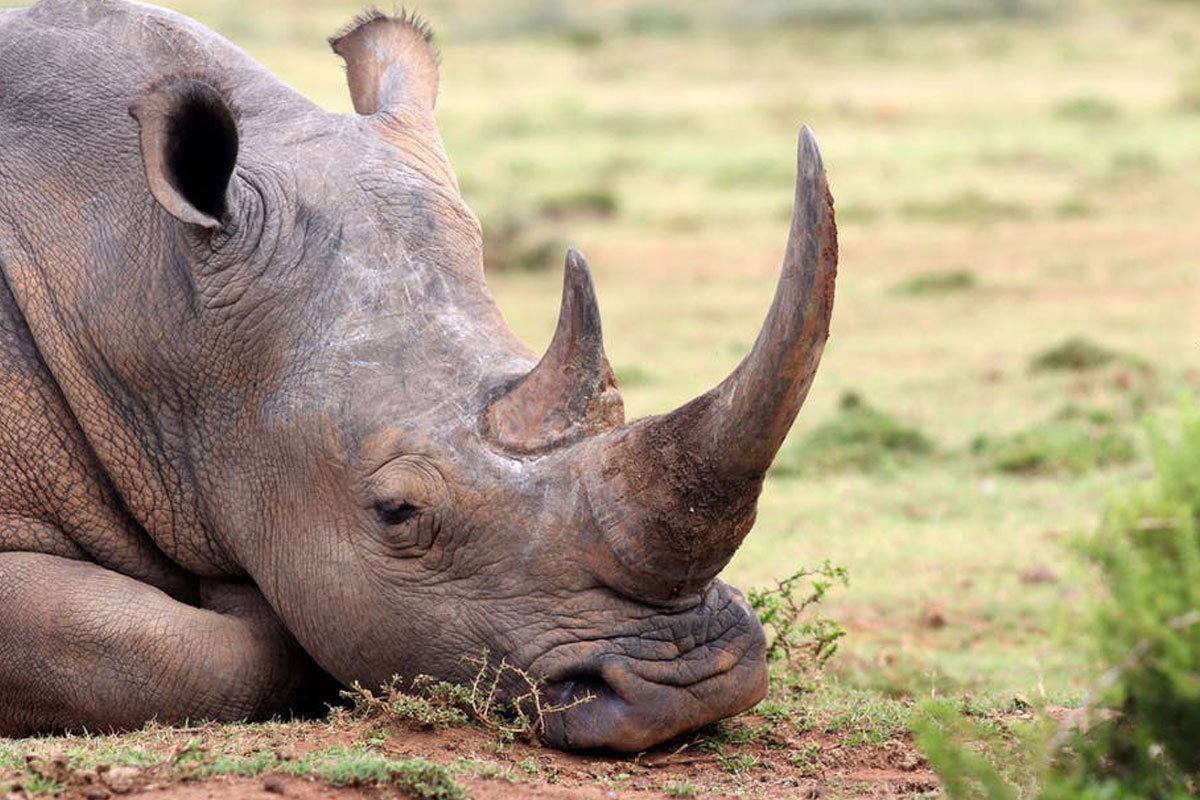 The easiest way to identify a rhino is by its horn. A rhino's horn can grow significantly throughout its whole life and reach up to 150 cm (1.5 meters).

The African Rhinos have two horns on their head and the front horn is usually the larger one. At times, a third horn will also grow in any of the African rhino species.

While the rhino's horn is highly sought after by poachers who supply the illegal black market in wildlife, the horn is made up of the same components as human hair or fingernails.

A rhino has a relatively small brain 400 - 500 grams for an animal of its enormous size. This doesn't mean that rhinos aren't intelligent because they are, and can easily be trained.

Rhinocerous have thick skin that can measure between 1.5 and 5 centimetres thick. The skin is formed from layers of collagen.

Besides having thick skin, the rhino's skin is very sensitive - just the same way as the elephant's skin. 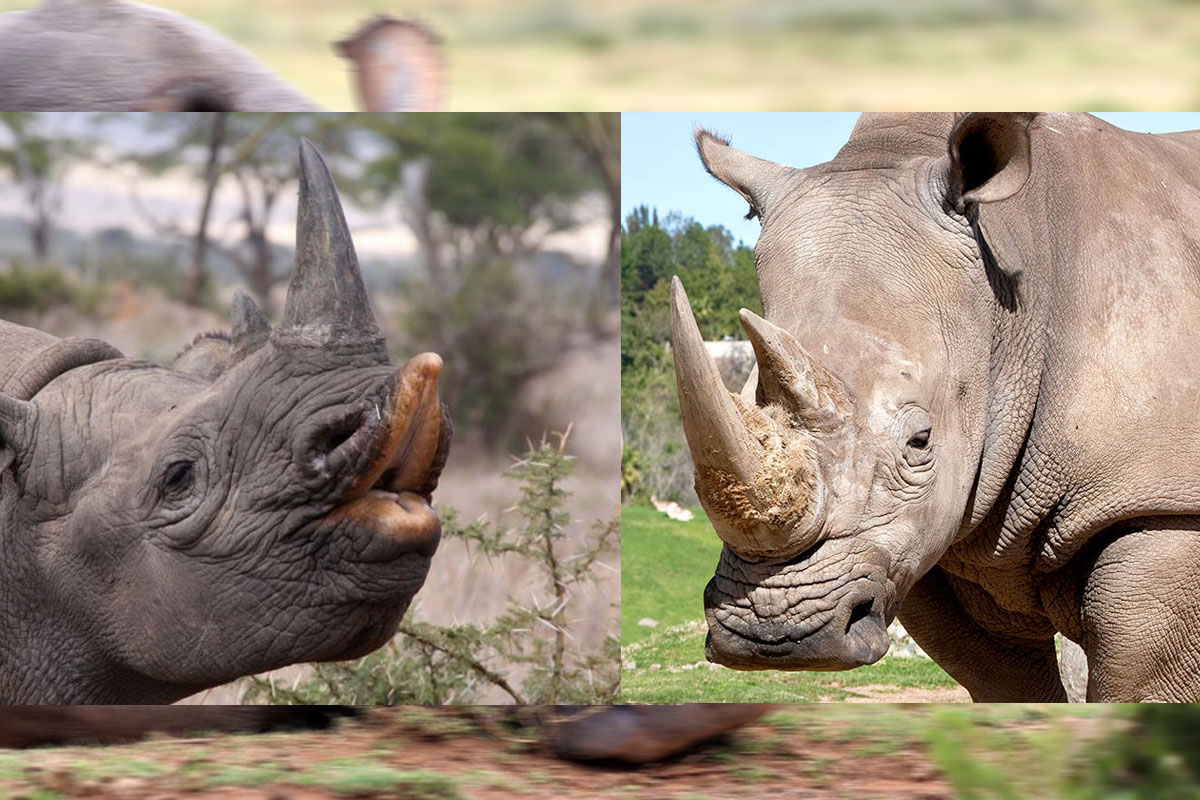 Unlike the naming, Black and white rhinos have the same dark grey-looking skin. The only easily noticeable physical difference is in the shape of their mouths.

The black rhino has pointed lips whereas the white rhino has wide/square lips. Other differences are in their sizes but those are hard to tell with the naked eye.

7. Where Can I See Rhinos In The Wild?

Rhinos can be found in Africa and Asia. In Africa, Rhinos inhabit the grasslands and floodplains of Eastern and Southern Africa.

African rhinos can be found in wild places of the following countries.

8. Did Rhinos Exist In Other Places? 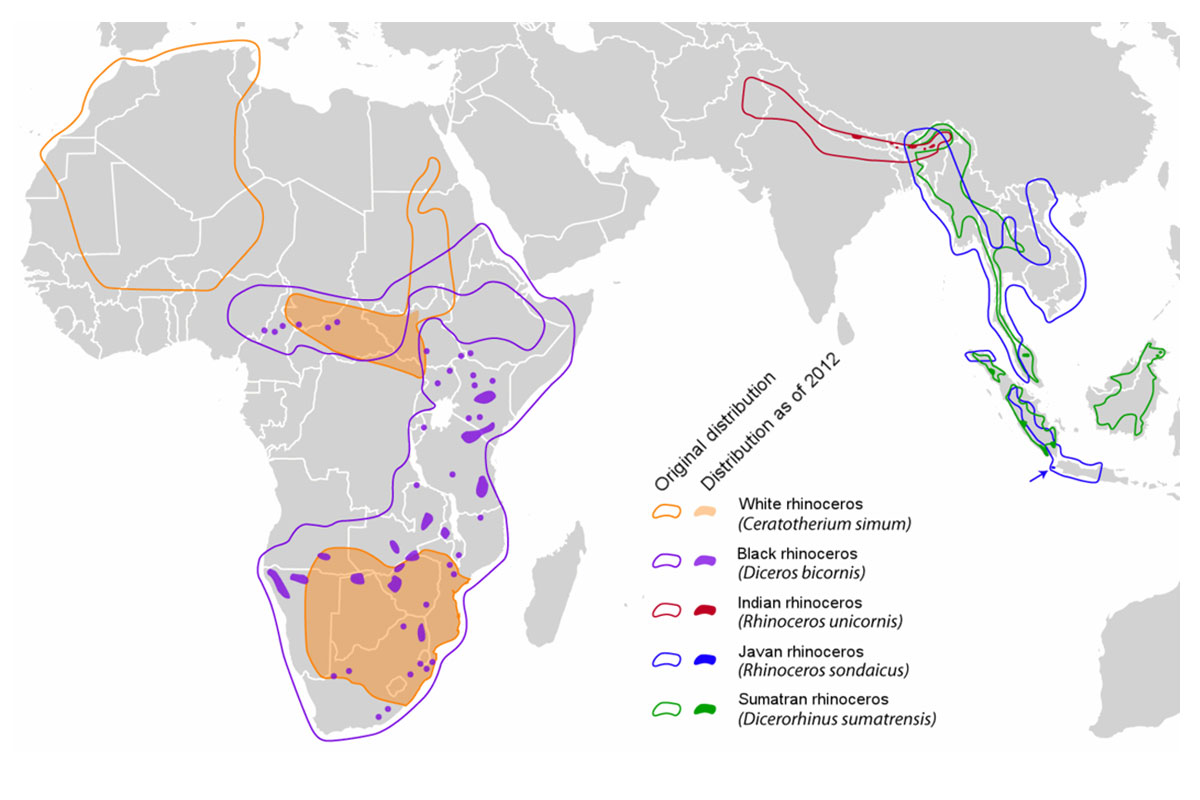 Rhinos used to live in a much large range covering about half of Africa and a large part of Eastern Asia. The area has since reduced by more than 80% to sparsely distributed habitats.

Rhinos are herbivores that primarily eat leafy material. Their diet is mainly comprised of leaves, buds, shoots, grass, and bushes.

Have no teeth at the front of their mouths and thus rely on their lips to pluck food.

Rhinos are big animals and eat about 50 Kgs of food each day. In comparison, a human eats an average of 2 Kilograms of food and water per day.

11. How Do Rhinos Reproduce? 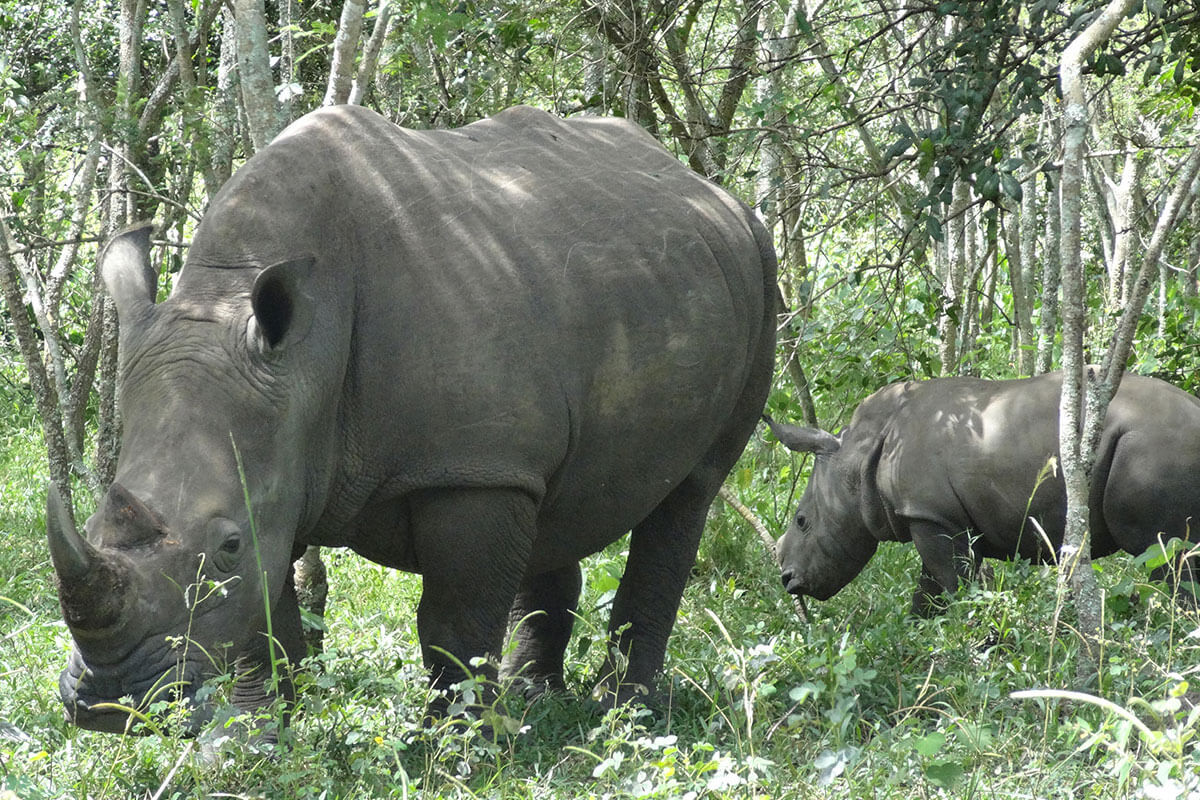 A baby rhino is called a calf and can weigh between 40 and 60 Kilograms at birth.

A group of rhinos is called a 'herd' or 'crash'.

Black rhinos are often solitary whereas the white rhino is a bit social. Rhinos are not strictly territorial and at times their territory will overlap leading them to share feeding ground, wallows, and water points.

13. How Do Rhinos Communicate 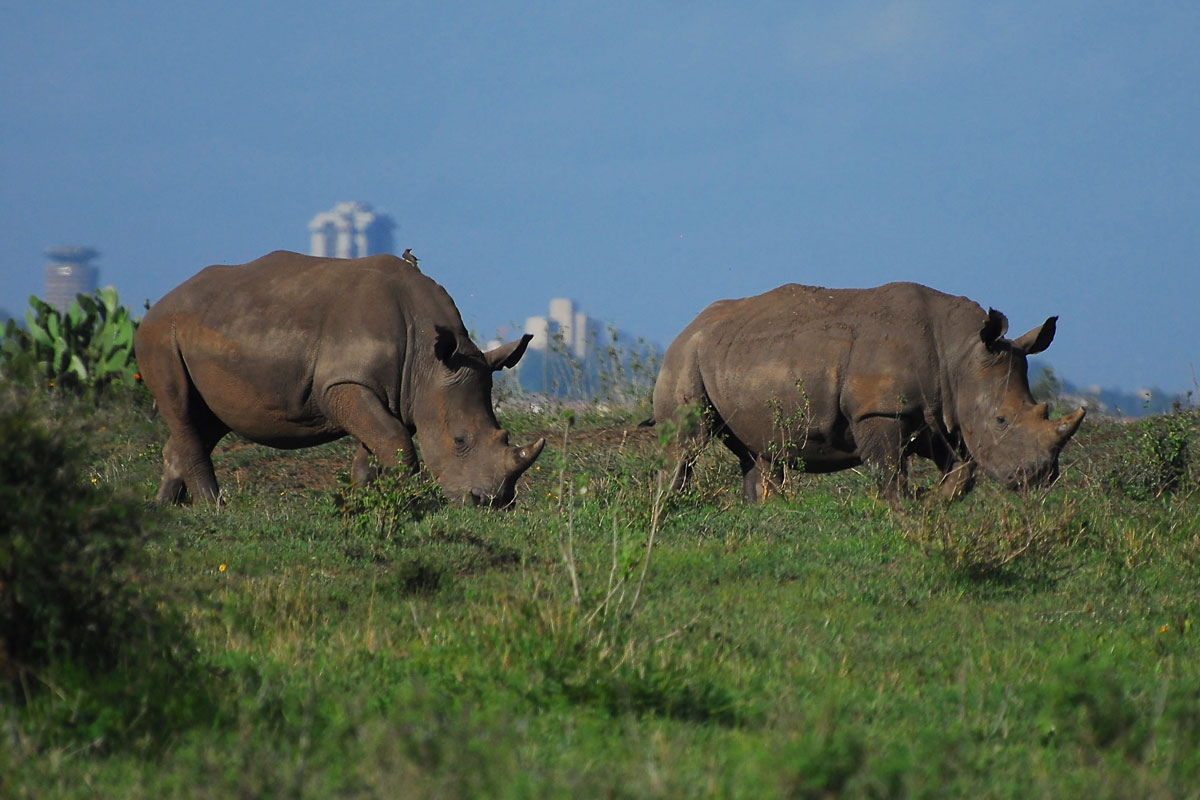 Rhinos communicate in many ways such as vocalizations, scent, body language, and Infrasonic communication.

Rhinos can squeal, snort, moo, growl, and even make a trumpet sound. Their sense of smell is very good and can communicate through their dung (mitten) and urine.

Body language is also used by rhinos to communicate. For example, flattening their ears or rubbing against each other to show affection. Infrasonic communication occurs at a frequency that cannot be heard by humans

A Rhinoceros can live between 35 and 40 years in the wilderness. Rhinos in the zoo can live longer. 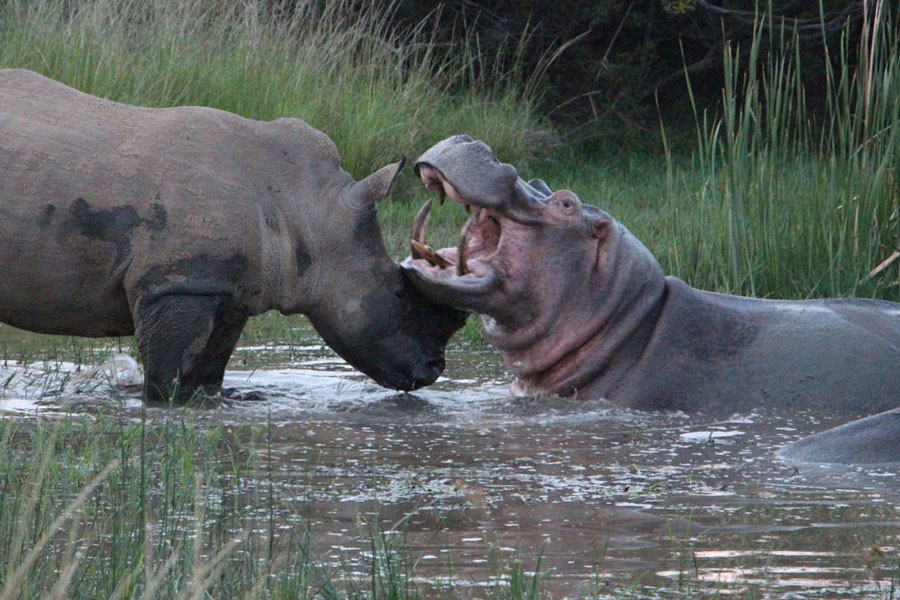 With a strong horn at the front and centre of its head, a rhino seems like an animal built to battle out any rival in the African savannah.
Rhinos generally prefer keeping to themselves and are quite calm and less threatening.

Despite this peaceful attitude, Rhinos do charge towards any sign of danger at high speeds. A rhino can run at a speed of up to 55 kilometres per hour - which is much faster than an average human. That is faster than the fastest human, Usain Bolt.

Black rhinos do fight among each other and more than 30% of those fights end in death for one of the rhinos.

White rhinos might not start a fight, they can handle their fights. A rhino is one of the animals that even the dangerous hippos don't pick a fight with.

16. Why Are Rhinos Poached?

Rhinos are poached for their horn, and at times other body parts too. This is mainly for the black market trade in endangered animal products. 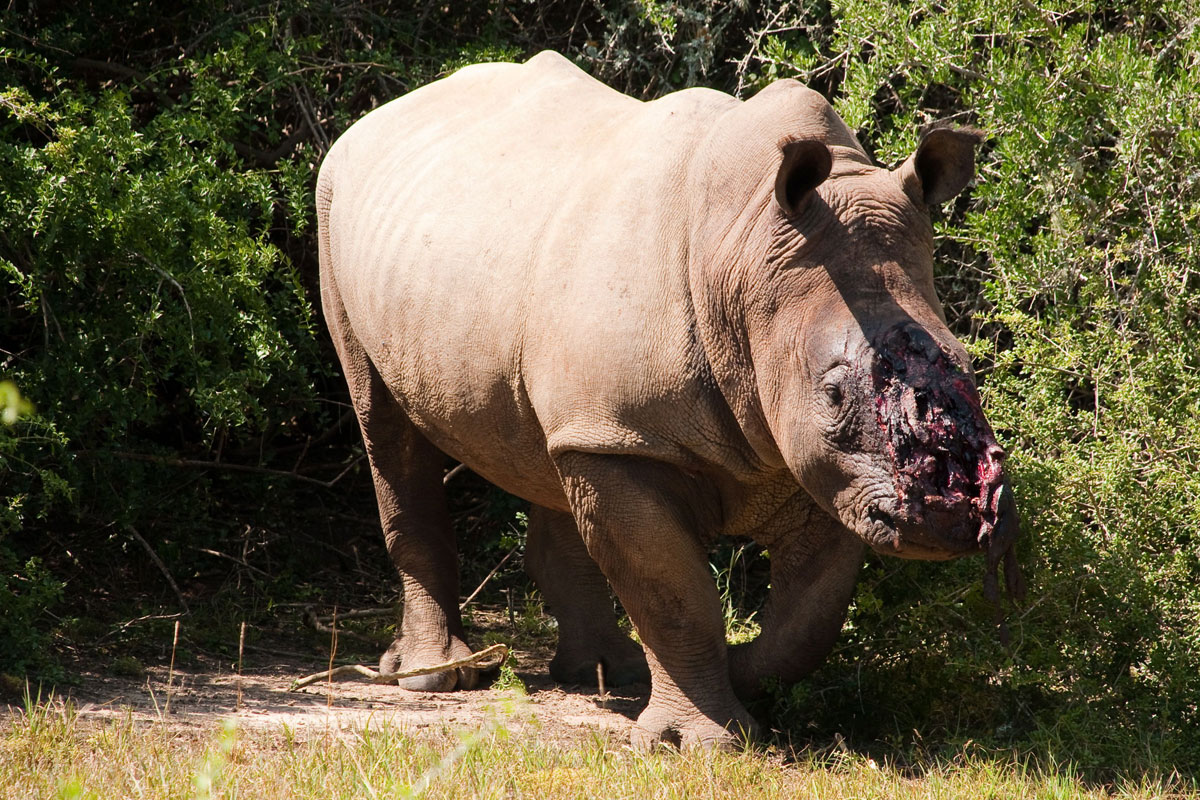 These rhino parts, especially the horn are believed to have healing qualities and thus command a high price, especially in Eastern Asia. The Rhino horn sells for the same price as gold - sometimes even higher.

Other black market buyers are collectors who want animal products as trophies.

Aside from the poaching, adult rhinos have no predators in the wilderness. Young rhinos can however be preyed on by lions, hyenas, African wild dogs, and crocodiles.

Rhinos face another human threat in terms of habitat loss. Increasing human populations lead to increasing human activity that ends up taking more land and encroaching on the habitat that rhinos call home.

The estimated population numbers are from the International Union for the Conservation of Nature and Natural Resources (IUCN Redlist).

Rhinos are definitely interesting animals that are fun to see in their natural environment. The fact that they get killed for what is essentially human hair is unimaginably sad, and yet true.

When you go on safari to see some of these animals, including rhinos, we do hope that this prior knowledge makes your fascination with them, and your time in the wild even more elevated.

Tourism activities such as visiting the national parks help generate some money which protects these habitats for rhinos and other animals that share the ecosystem. Tourism also leads to many other economic benefits for the locals.

We think tourism is playing a major role in the conservation of animals (not just rhinos) and nature as a whole, and we are crazy about conservation.

If this article can play the tiniest role in discouraging the rhino horn trade, and encourage just one person to add rhinos to their itinerary, we'll consider it a success.