15+ Facts About Lions. Size, hunting, diet, wild population & more to know about the king of beasts.

Lions are often referred to as the king of the jungle, or more accurately, king of beasts and are one of Africa's most well-known wild animals and most respected predators in the wild. 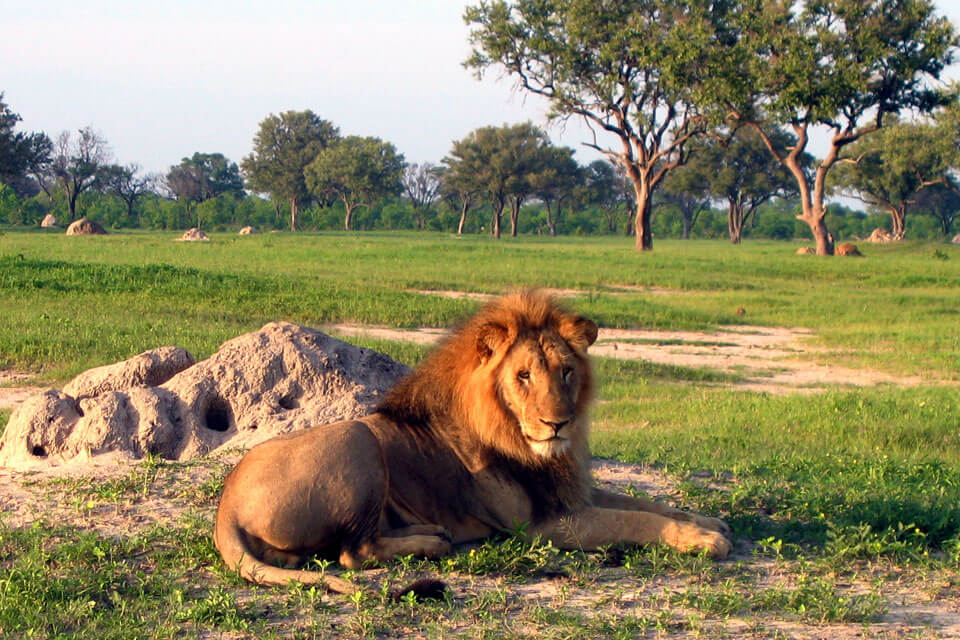 Lions are the second biggest cats after tigers. A lion can measure 2 meters (without the tail) and weigh up to 250 kg.

2. Why Do Male Lions Have Manes? 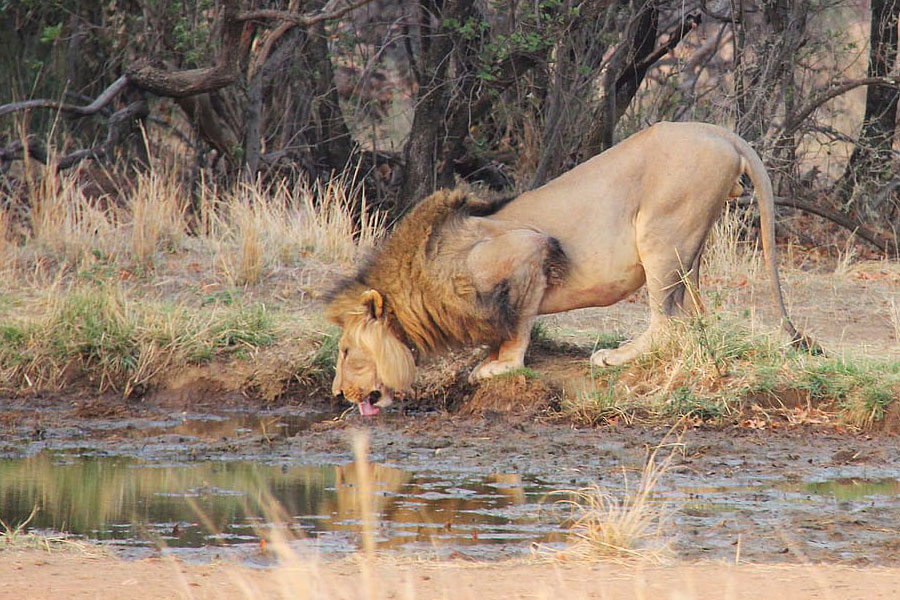 A lion's mane is the most identifying feature of lions. Besides separating the male lions from females, the mane can signify healthy to the other lions - especially females. Researchers in Serengeti observed that females preferred lions with darker manes.

The mane starts growing in male lions at around 1 year of age and becomes darker as it keeps growing.

Lions are fast runners and can reach speeds of up to 80 km/h (50 miles per hour). This top speed can only be reached in short bursts because lions lack the stamina to maintain such high speeds.

Additionally, lions can make leaps of up to 36 feet.

While lions are not the fastest animals, they are still very capable beasts that easily kill prey with their strength and speed.

This is because the savannah favors many animal species - which the lion can hunt for food. 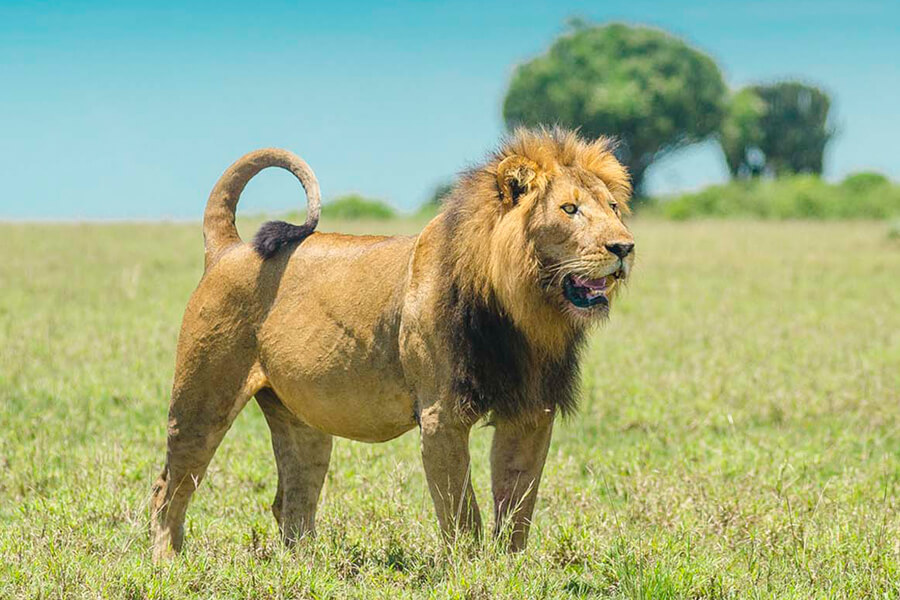 5. Where Can I See Many Lions In The Wild?

You can see lions in many national parks and game reserves in sub-Saharan Africa. You can also see lions in India's Gir National Park.

Lions can easily be seen in national parks and protected areas in Eastern and Southern Africa countries such as Tanzania, Kenya, South Africa, Zambia, Zimbabwe, Uganda, Namibia and Botswana among others.

Take a look at our article on 17 national parks where you can see lions in the wild, in which we pick some of the parks where your chances of seeing a lion are very high.

6. How Many Lions Make A Pride?

Lions are the most social of all the big cats and live in big groups, called pride. A lion's pride usually consists of around 15 members - both adults and cubs.

The pride often comprises a few adult males (up to 4 males), related females, and cubs. Bigger groups of up to 40 individuals have been observed but are not very common. 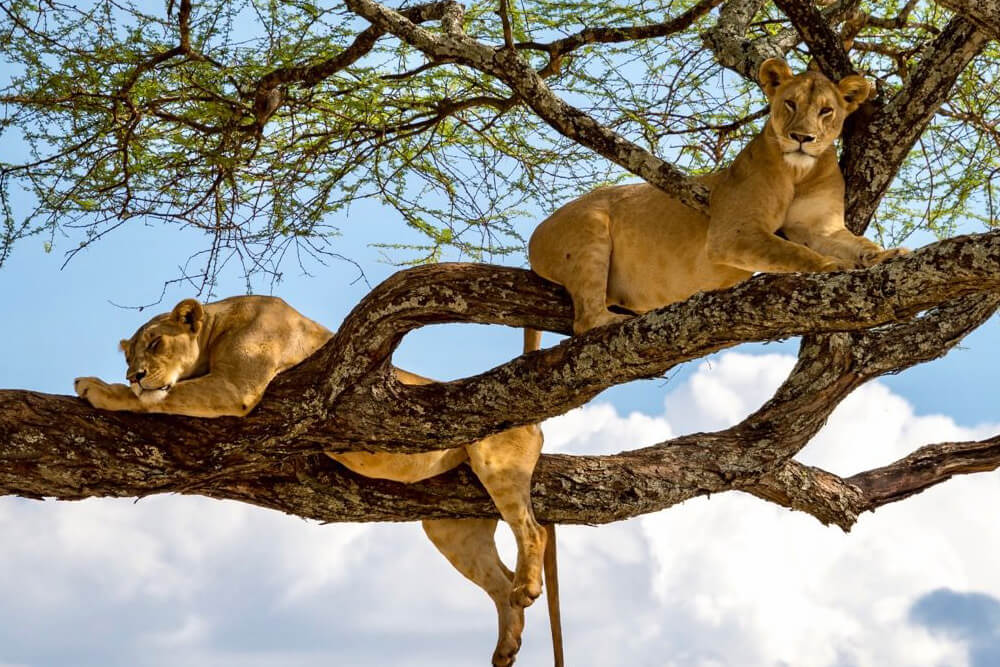 Lions are the laziest of all the big cats and spend much of their day sleeping. Lions can often be seen lying on rock surfaces or under the shade while the cubs play around. A lion can sleep up to 20 hours in a single day.

Lions do roar very loudly and the roar can be heard from 5 kilometres away. Roars are used to advertise their presence. Lions often roar at night.

9. How Do Lions Communicate?

Lions do communicate in several ways, among which is head rubbing, social licking, postures as well as a large selection of vocalisations. With all these, lions can communicate with each other effectively.

To mark their territory, lions use chemical marking with their urine - to indicate to other lions the presence of a territory.

In the Wilderness, lions usually live for a period of 7 to 10 years in the wild but they can be able to live up to 15 years in a zoo.

The short lifespan in the wilderness can in part be attributed to the kicks and bumps a lion has to endure for every hunt it goes on. For example, a zebra's kick is strong enough to leave a lion significantly injured - and yet the zebra is far from the strongest of animals. 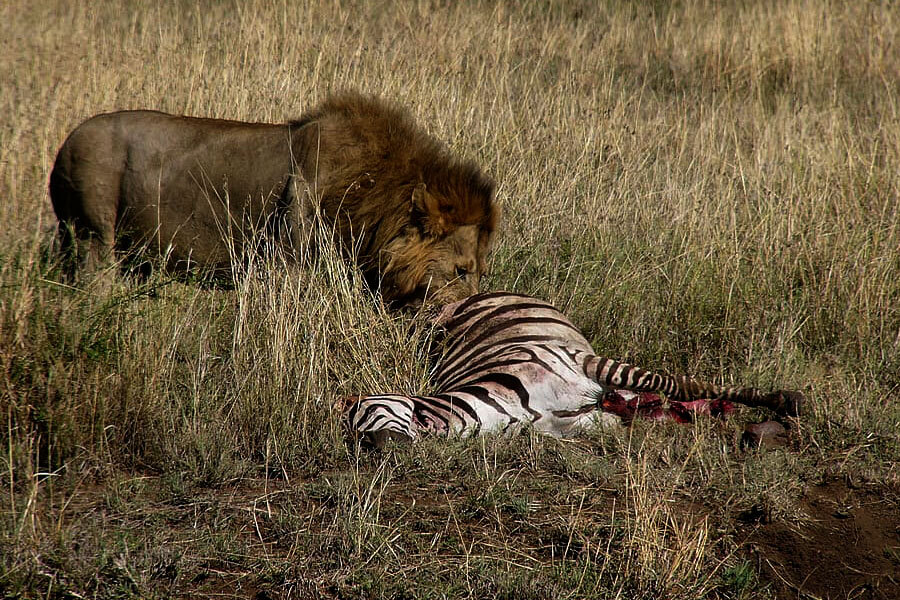 Lions are carnivores and only eat meat for sustenance. This meat is always a result of a successful hunt of other animals in the wilderness.

Lions hunt almost all the animals in their habitat but often focus on antelopes, wildebeest, zebras and younger buffaloes. Depending on the available prey, lions can even hunt bigger animals such as elephants and hippos but this is equally risky for lions and doesn't happen a lot.

On the rare occasion where the opportunity presents itself, lions will scavenge by chasing other predators like leopards, cheetahs and hyenas away from their kill.

An adult lioness eats about 5 kg of meat every day while the male lion requires around 7 kg of meat per day. Lions tend to gorge themselves and could eat around 30 kg of meat in one session - sometimes with little breaks.

Related article: What do lions eat in the wild savannah?

Lions do drink water in smaller quantities. Whenever lions can access water, they always take a sip. While a lion has to eat meat every day, it can easily go 4 days without drinking water.

14. Why Are Lionesses The Hunters? 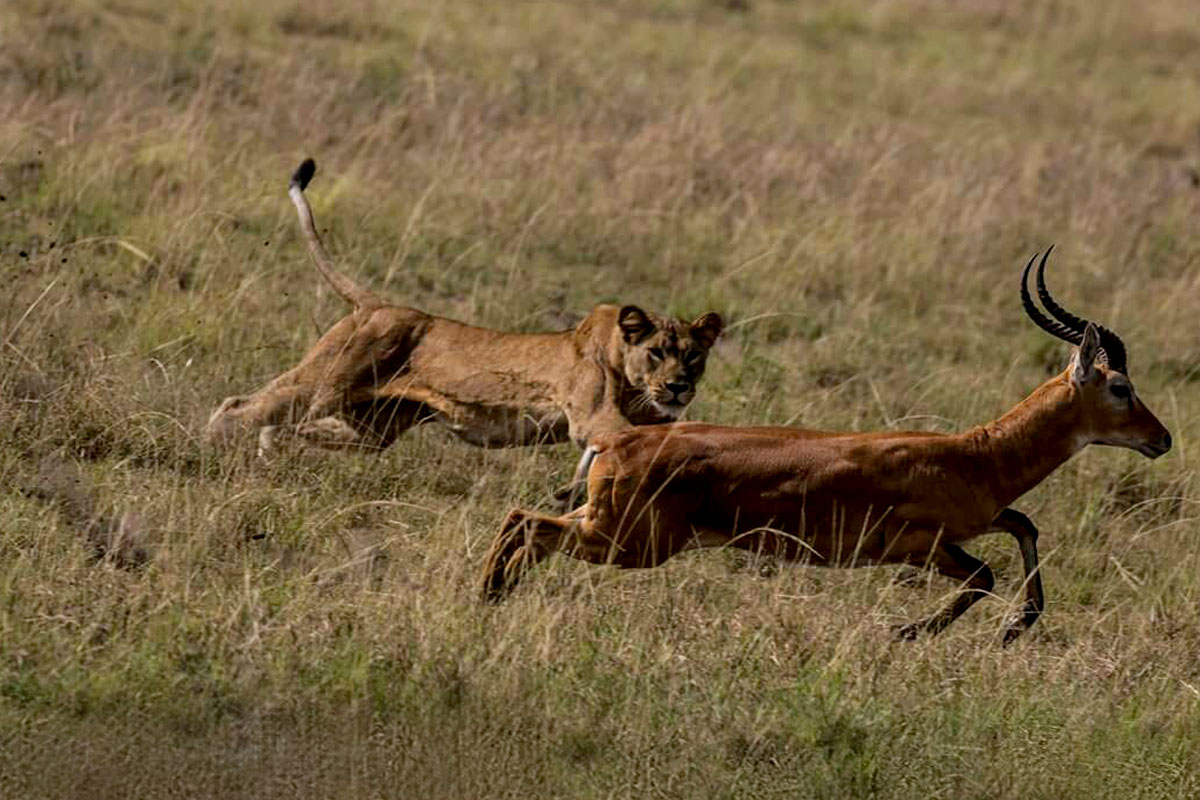 All lions (male and female) are really good hunters but females are the primary hunters of the pride. Lionesses cooperate very well and execute the hunt by surrounding the prey and isolating it from its herd.

The male is often called upon to hunt bigger prey and use its extra strength, but under most circumstances, the lionesses hunt and take care of the lion cubs while the Male protects the pride from invaders. 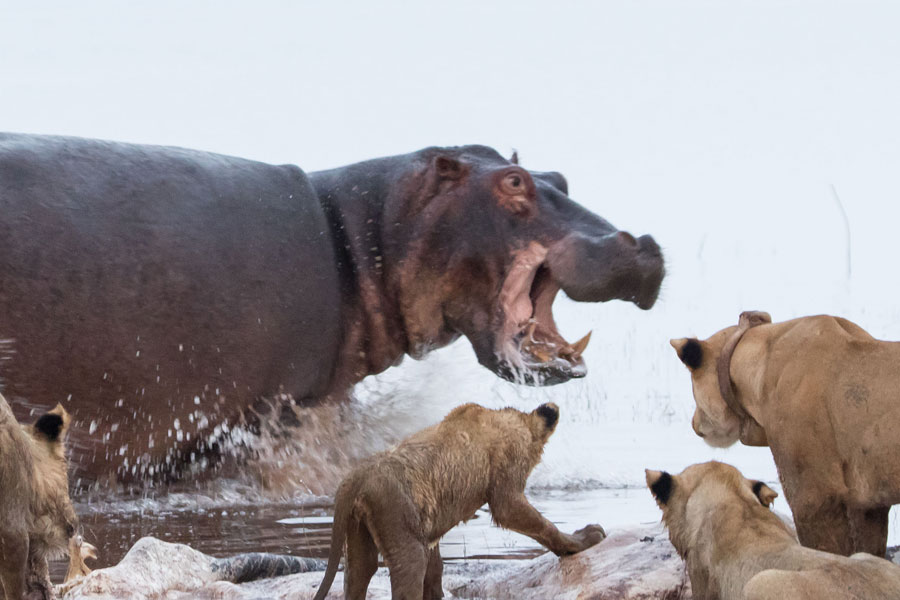 Lions are very brave animals but they do try to avoid confrontations with elephants, hippos, rhinos, giraffes, cape buffalo, and crocodiles. This is because these animals are very strong and would most likely harm the lion very seriously.

In a situation where lions can't find food, they will muster up their bravery and attack on of these animals - starting with their young ones.

According to the last assessment of lions by the International Union on Conservation of Nature (IUCN Redlist), lions are in danger and therefore classified as vulnerable species.

The research estimates that there are less than 40,000 lions left in the wild and the population is continuing to decrease.

We all love lions because they are associated with such things as strength, bravery, and power.

When you see the lions as they lay around and lazily watch over the vast wildernesses, you really understand why they are called the king of beasts.

As one of the big 5 safari animals, lions are a highlight of any African safari and you should take every opportunity to see them with your eyes. We hope you enjoyed learning about lions, and that this knowledge can make your future African Safari a better experience.