Top places to visit in Morocco. For Culture, Old Medinas, the desert and much more

Morocco is one of the African countries which has enjoyed a long history of tourism from all parts of the world. This is because of the many places, and activities that attract people there.

Many people come to Morocco because of the different attractions that they would like to explore. Morocco has so much to offer for any visitor, but we are going to focus this article on 15 places that make a visit to Morocco very special.

Because we each have different preferences, this list is not a ranking of which place is better. We leave that decision to you, based on your personal interests and experiences.

Best Places To Visit In Morocco 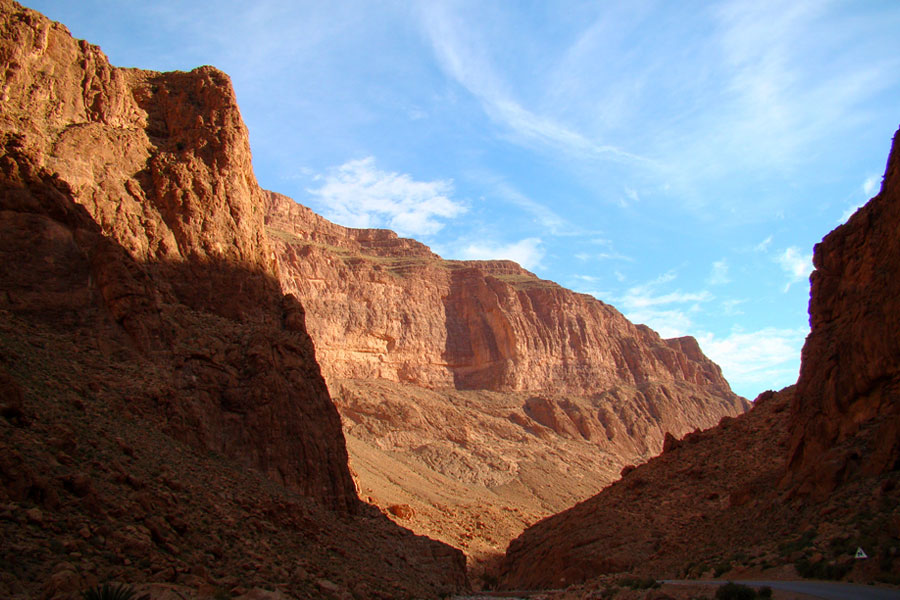 The Dades Valley runs between the Jebel Sarhro and High Altas mountain ranges and is frequently visited by Globetrotters because it offers great scenic views of the surrounding area. Don’t forget to head to Todra Gorge for the best experience.

Aït Ben Haddou is an ancient village that is home to a number of houses that have been built on a hillside. Most of the village has been abandoned in the present day and has been left for the tourists to explore.

It is always best to hire a guide when visiting this place. If you wish to witness the renowned ‘cafe view’, take a trip deep inside the village. 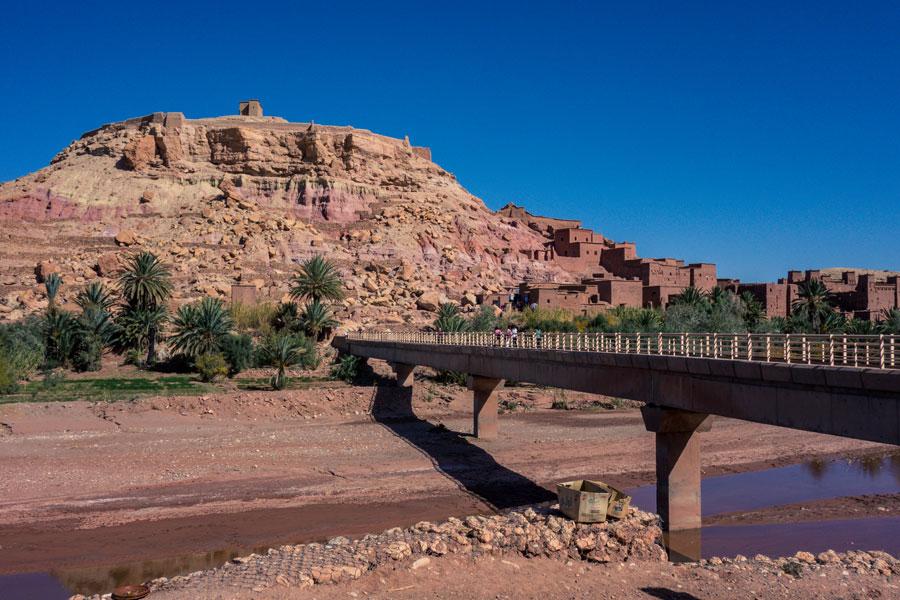 For those who seek paths less taken, Rose Valley might just suit your path. The way the vegetation blends with the landscape around, plus the calming blue waters creates an outstanding sight.

Rose valley got its name from the massive pink gardens of roses that cover its floor.

Established in the year 1844 by the Spanish, Dhakla is a 40 km stretch sitting on the sandy peninsula of the Tropic of Cancer. The is desert spread as far as the eye can see, and that is part of Dakhla's special charm.

Dakhla might seem like a remote destination by virtue of the structures standing in this destination, but it has some great hotels, restaurants, and facilities for thrilling sports. Dakhla is developing to be a favourite among local Moroccans as well as foreign tourists. 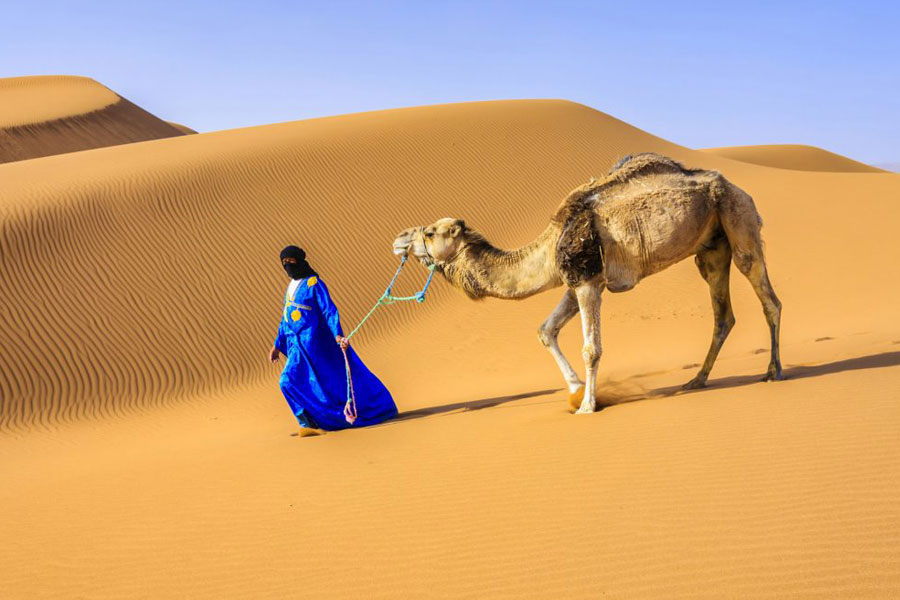 The Sahara desert is absolutely a must-visit when you’re in Morocco. From watching the gorgeous sunset over the dunes to gazing at the sky full of bright stars, every experience in the desert is captivating and unforgettable.

It is good to keep a few extra days for a trip to the Sahara Desert because you won't like having to rush. 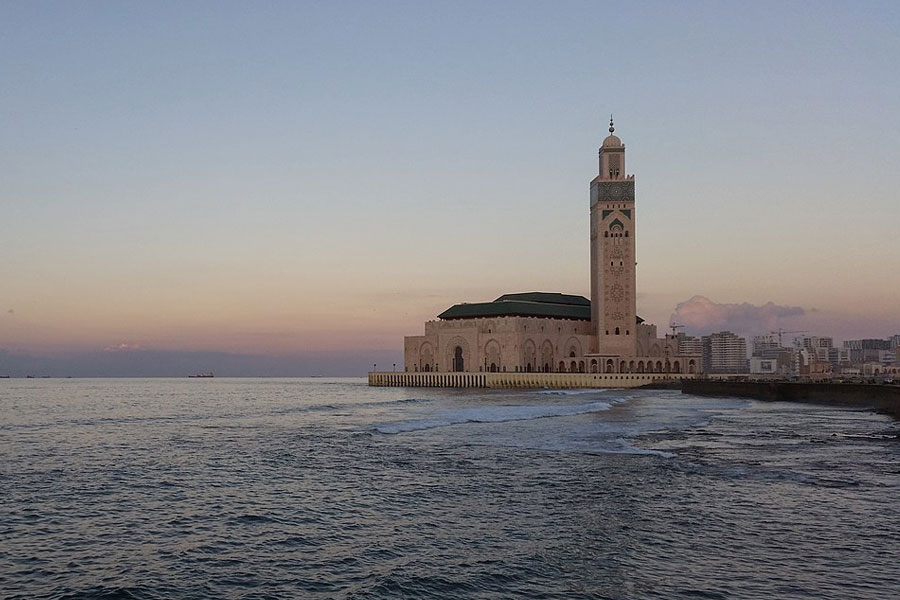 While Casablanca might not be as atmospheric as the other cities, it is undoubtedly one of the best places to visit in Morocco and the ideal representation of modernity.

The city’s stunning moresque buildings, which meld the French-colonial design with the traditional Moroccan style, is the best thing to admire here. Owing to its awesome food and architecture, Casablanca is among the best places to travel in Morocco. 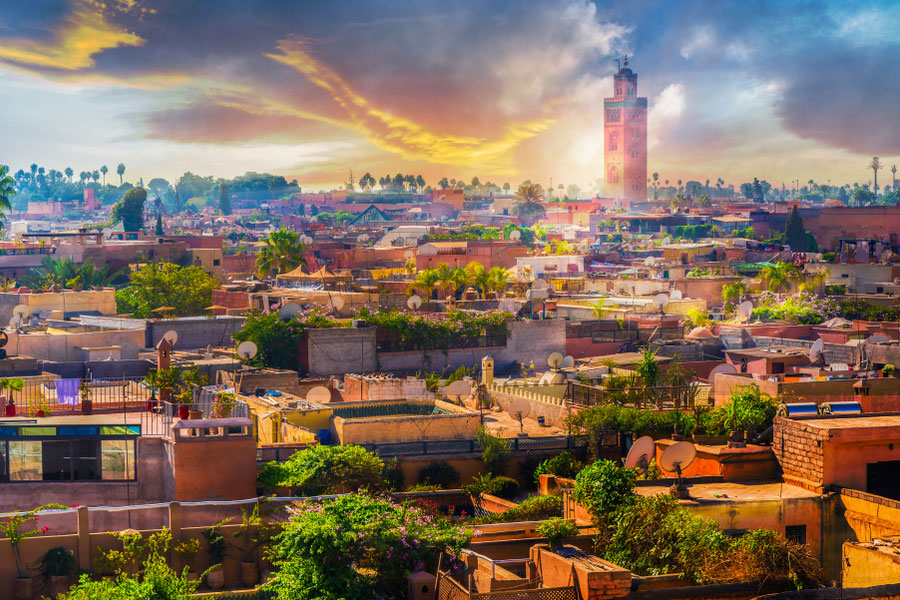 Located north of the foothills of the Atlas Mountains, Marrakech is a bustling city with a large medina, and is one of the top Morocco tourist attractions.

From the central square of Djemma El-Fna to the El Badi Palace, and the bustling souks or bazaars, there’s a lot to do and see here! Shopping is one of the best things to do in Morocco, and Marrakech is the most ideal place for it. 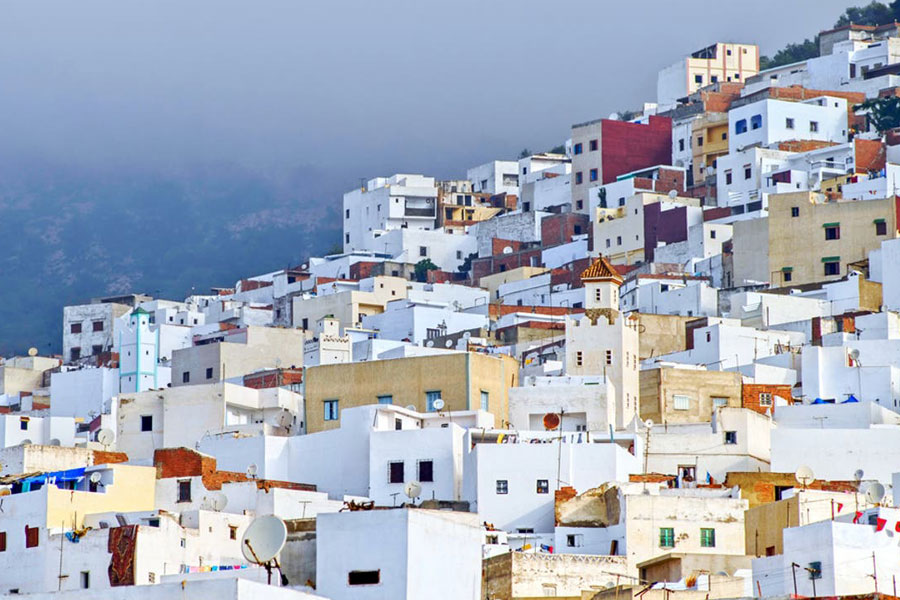 Tangier is among the most beautiful Morocco tourist places out of all the European-looking Moroccan cities. This fascinating city had played a major role in the literary history of Morocco in the 20th-century and is very much responsible for shaping this country as we know it today.

It is this very history and culture that attracts tourists here from far and wide. Other than the historical vibes, you’ll also find some remaining bohemian cafes and louche bars here to chill here located in the midst of the famous places to see in Morocco. 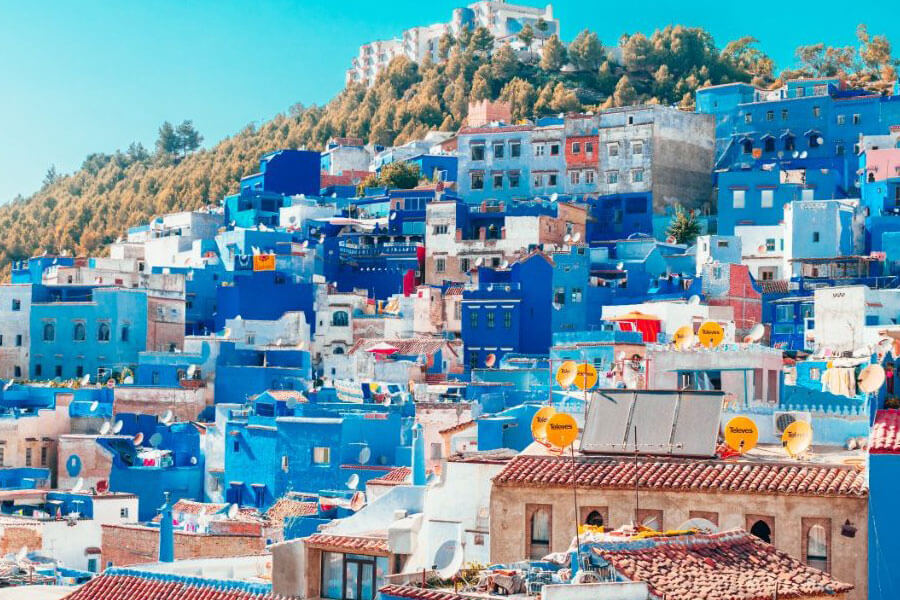 Chefchaouen, also known as 'blue city' is a small town set amidst the Rif mountains. A small town tastefully set in a bigger landscape. Amongst all the Morocco cities to visit, this one is popular for solo travelling and exploring the town’s famous blue and white painted houses.

The people are also super friendly, so you will surely get to revel in some sweet hospitality here that makes this one of the top places to visit in Morocco. 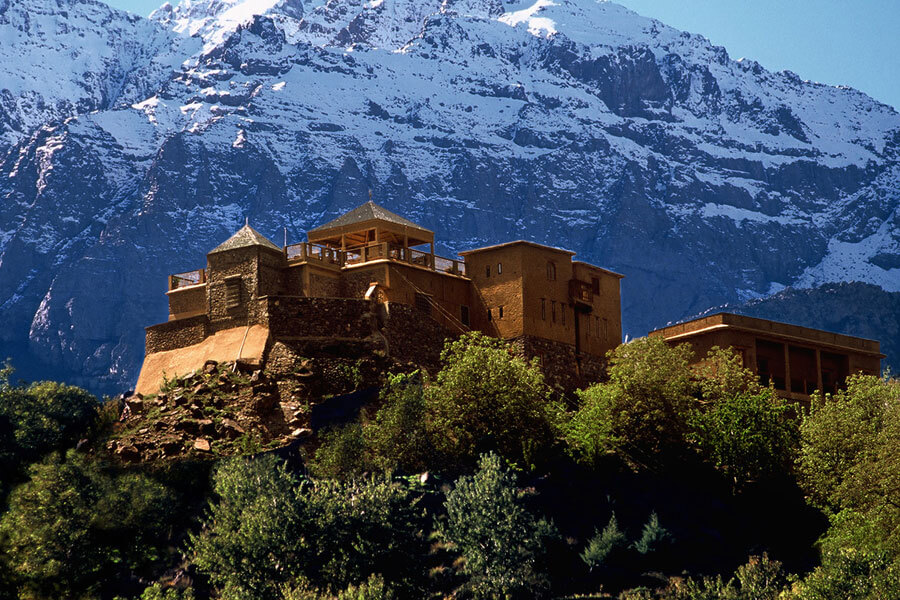 Being North Africa’s highest mountain range, High Atlas is popularly known as the mountain of mountains. This place is a paradise for trekkers, especially from spring to autumn.

It runs diagonally across Morocco for approximately 1000 km, and its saw-toothed Jurassic peaks act as a weather barrier. 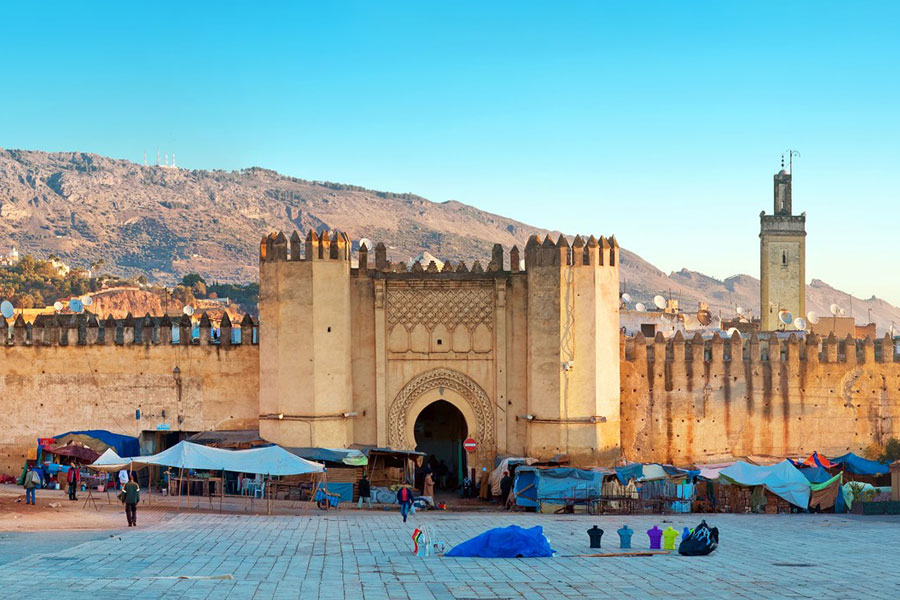 Medieval Fez served as Morocco's capital for more than 400 years and is still an important religious and cultural center.

The old walled part of the city, known as Fes el-Bali, was founded in the 9th century and is recognized by UNESCO for the historical importance of its Idrisid dynasty architecture.

It is best explored on foot and includes the Al Quaraouiyine mosque and its associated university, which is the oldest in the world (dating back to 859 AD).

Morocco is home to plenty of Kasbahs as well as pretty old town areas where these are located. One of the most charming and best places to visit in Morocco of these is Rabat’s Oudaias Kasbah neighborhood which is called the nation’s most picturesque region.

Its peaceful and quaint vibes also make it a big crowd puller as well as one of the best Morocco points of interest set in the heart of the main city. You will find inside the high walls of this age-old old fortress white and blue houses and colorful flower pots studded on either side of a neat lane.

Asilah is located on Morocco's North Atlantic coast. It is popular among both tourists and Moroccans as a summer spot. Besides the sandy beaches, the city walls covered in colorful murals that make Asilah very enchanting and attractive.

The annual arts festival which happens in August is a major event for both the young and old as it exudes so much vibrance.

Located on the coast, Rabat is Morocco's capital city. The good all year round weather and beautiful beaches make this capital city even more attractive for tourists.

The city's new portion, which has wide boulevards and outdoor cafes, and the old town or medina, which has fortified walls make for a good time while in Morocco's capital.

Meknes is located in the north of Morocco and is a 9th-century medina and also one of the country’s previous capitals. Its old age and architecture make Meknes a very interesting place.

The Royal Palace and other major historical sites in Meknes are a good way to learn about Morocco's culture from the 9th century. While the city might not feel as vibrant as other Moroccan cities, you will enjoy fascinating and exotic Arabian experiences.

As already mentioned, we have to state again that this list of the best places to visit in Morocco is not ranked in any way.

Based on what you are interested in, we would love to know which of these places would you be most excited to visit when you go to morocco?