Facts About The Shoebill. 16 Interesting things to know about the elusive shoebill stork

The shoebill stork is one of those special African birds that seems unreal. This prehistoric-looking big bird is one of the most sought after by birders and non-birders alike.

The shoebill's solitary, quiet and patient demeanour makes it seem as though you are looking at an alien bird that has been dropped into this new world, and yet the shoebill rules its territory of the water. 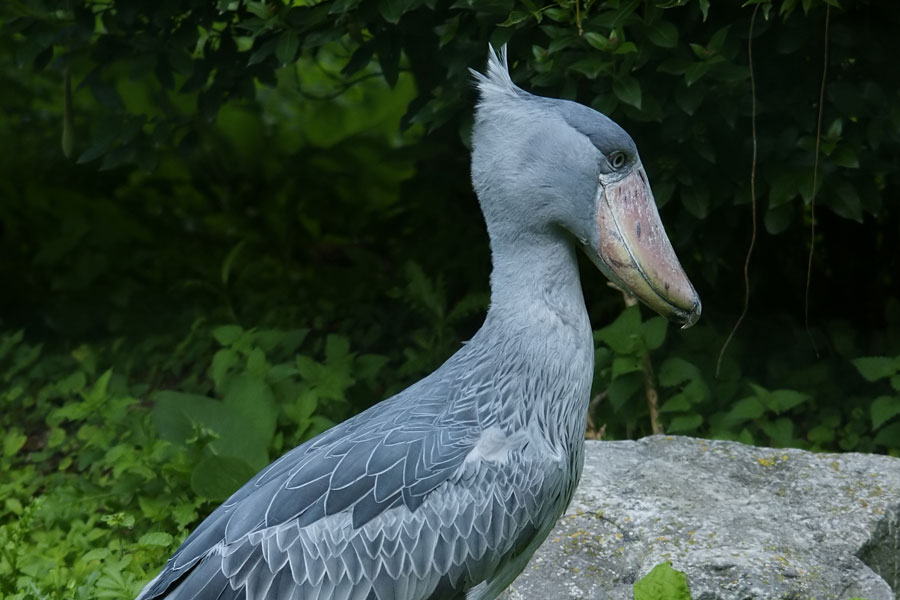 In this article, we'll take a look at some interesting facts about the shoebill, and hopefully inspire you to add it to your safari bucket list.

Interesting Facts About The Elusive Shoebill

1. Why Is It Called Shoebill?

The shoebill's scientific name - Balaeniceps rex is derived from the Latin words Balaena (Whale) and Caput (head), abbreviated as ceps.

This is why the shoebill is also referred to as Whalehead or Whale-headed stork. The name shoebill is derived from the fact that the bird's big bill resembles a shoe.

2. How Big Is A Shoebill Stork?

The shoebill is a tall bird that can measure as much as 1.5 metres (5 feet) in height as well as between 1 and 1.4metres in length from beak to tail.

Compared to a human, an adult shoebill is slightly shorter than an adult human of average height. 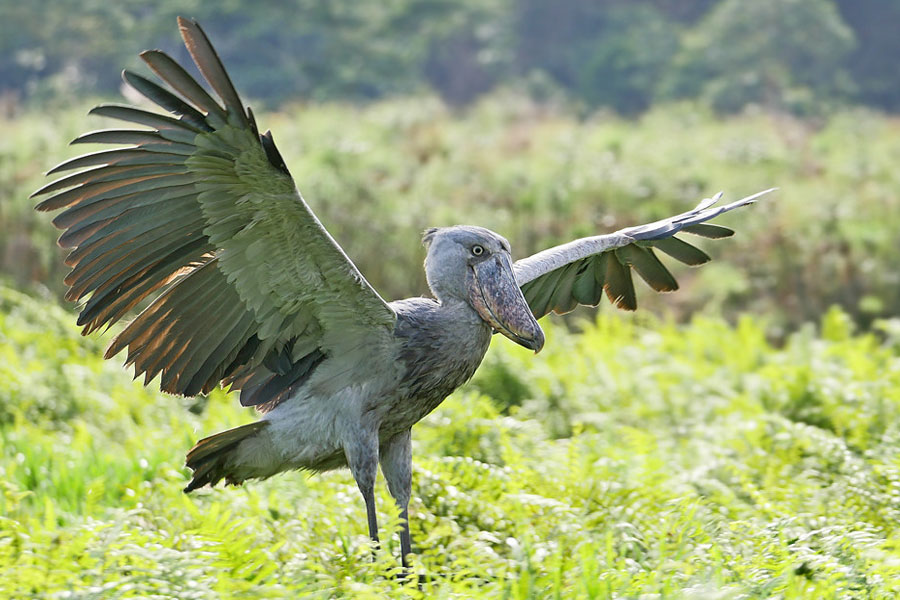 3. How Wide Is The Wingspan On A Shoebill

The shoebill has a very wide wingspan that can reach 2.4 metres (8 feet). This is wide than some of the tallest athletes in the world - like Shaq.

4. Where Do Shoebills Live?

Shoebills can be found in freshwater swamps of central tropical Africa from Sudan to northern Zambia.

The shoebill prefers less oxygenated waters of swamps, marshes and bogs because this forces the fish to come up for oxygen - which allows the shoebill to launch a violent strike. 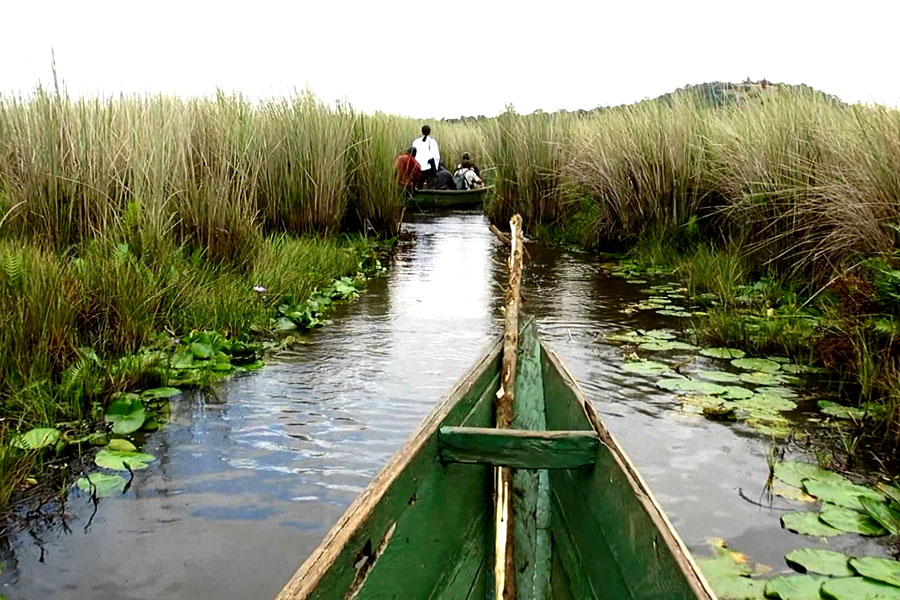 5. Where Can I See Shoebill Storks In The Wild?

Shoebill storks are most numerous in South Sudan's Sudd, as well as wetlands in Uganda, western Tanzania and Zambia.

With various birding areas in Uganda having shoebills, and the fact that you can see shoebills just 2 hours out of Kampala in Mabamba, Uganda is arguably the easiest place for seeing many shoebills in their natural habitat.

Shoebills can also be seen in Eastern DRC, Rwanda and northern Zambia. In other African countries, the records of shoebill storks have been more isolated and seeing a shoebill might be by chance.

If South Sudan was politically stable, it would be hands down the best experience for shoebill and other birding because of the Sudd.

Shoebills are not known for being aggressive towards humans and do not show any threatening behaviour to humans. Researchers find it easy to observe shoebills at a close distance of around 2 to 3 metres even when the bird is on its nest.

A shoebill will not feel threatened by the approach of humans if there is some vegetation in between.

7. What Do Shoebills Eat? 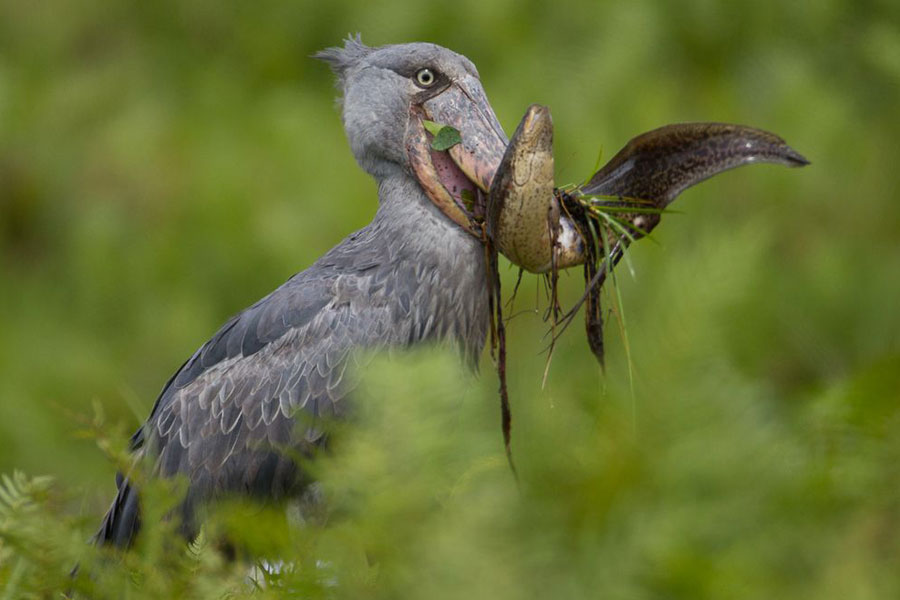 Shoebills are largely piscivores and prefer to eat the flesh of various fishes. Their preferred species include lungfish, tilapia, and catfish.

Shoebill storks also eat frogs, water snakes, Nile monitors, baby crocodiles and more rarely rodents, snails and waterfowl. The prey is often 5 to 20 inches in length and up to 0.5 kilograms in weight but larger prey has also been observed.

Shoebills are patient hunters that stalk their prey in a slow and lurking manner. The strides are slow and the bird is often motionless and quiet.

Relying on its vision, the shoebill often launches a quick violent strike and hold on to the struggling prey with the sharp hook/nail at the end of the beak. About 60% of the shoebill's hunts are successful which is a great success rate in the wild.

Besides their big size, shoebills are capable of flying short distances within their territory. Shoebills will rarely fly beyond a distance of 500 metres.

They fly by a combination of flapping and gliding, and with an estimated flapping rate of 150 flaps per minute, they are among the slowest of any birds.

10. What Is The Shoebill's Closest Relative?

Traditionally, shoebills were thought to be related to storks - like the marabou stork, but deeper research has indicated that they are closely related to pelicans and herons.

Molecular studies have found that the closest relative of the shoebill is the hamerkop.

Shoebills are solitary birds and will rarely be seen in a group. Even in areas where their population is quite large, shoebills keep a distance of at least 20 metres (66 feet)from each other.

Typically, there will be no more than 3 shoebill nests in an area of 1 square kilometre. 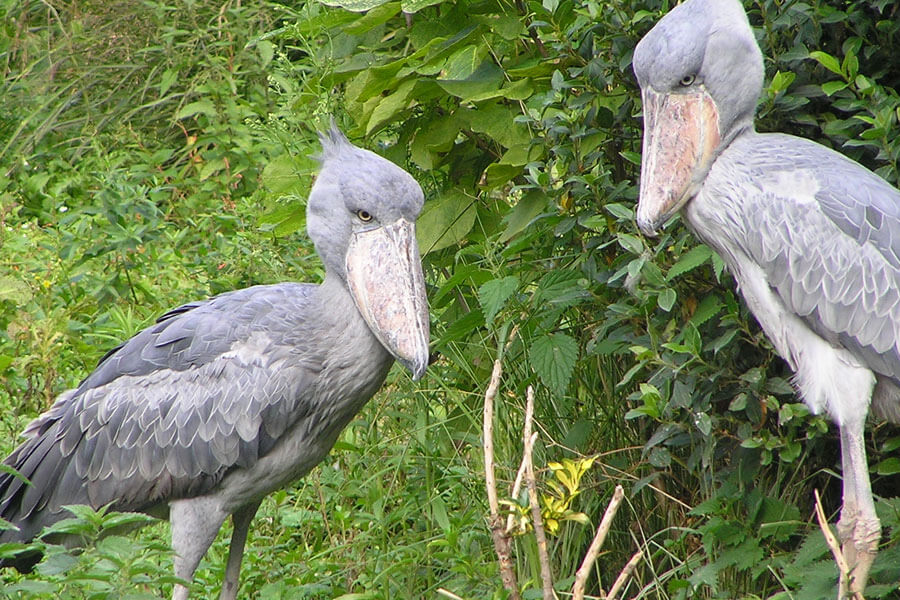 12. How Do Shoebill Storks Communicate?

The shoebill is a quiet bird that can even go for several days without making any sound. Apart from their quiet solitary routine, the shoebill can communicate with several sounds from the cow-like moo, high-pitched whines and bill clattering and many more.

Young shoebills call out to their parents for food by making a sound that is similar to that of human hiccups.

During the mating season when the male and females get together, they bow to each other as a display of their courtship.

13. How Do Shoebills Breed?

Shoebill storks mate at the end of the wet rainy season between April and June, and only breed once every year.

The female Shoebills lays not more than 3 eggs which are incubated for around 30 days. Both parents actively brood, shade, guard and protect the young nestlings. 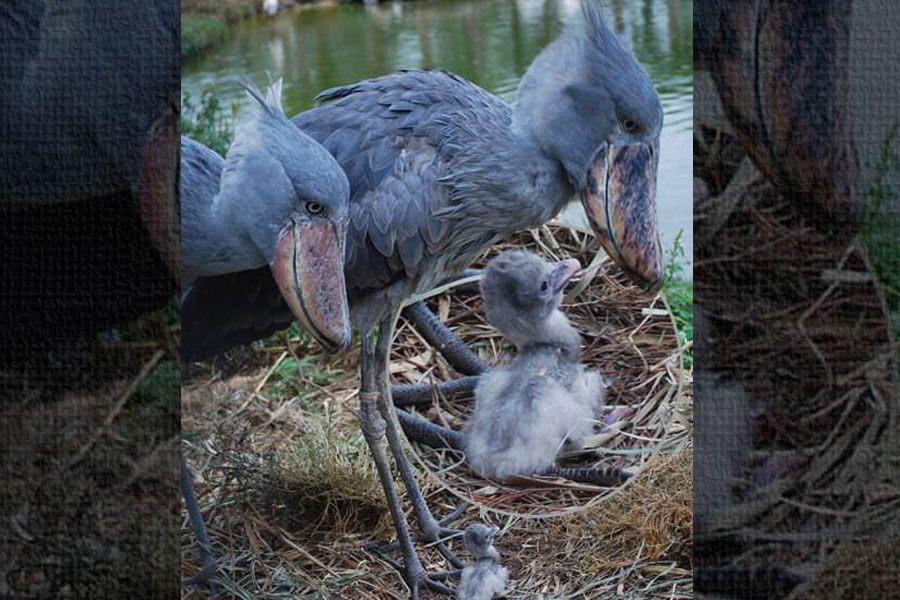 The young shoebills are fed by parents regurgitating food into their bills. Young shoebills rely on their mother for a period of around 3 to 4 months, after which it is able to survive on their own with minimal supervision.

Shoebills become sexually mature between the age of 3 and 4 years old. Shoebills mate with one partner for life.

14. How Long Do Shoebills Live For?

Shoebill storks do live very long lives and can live for more than 35 years in the wild.

15. Are Shoebills In Danger?

According to Birdlife International and the International Union for the Conservation of Nature (IUCN), shoebill storks are considered vulnerable species.

The main threats to the survival of shoebills are habitat destruction, disturbance and hunting.

16. How Many Shoebills Are Left In The Wild?

It is estimated that the number of shoebills in the wild is between 5,000 and 8,000 individuals. The majority of these lives in the swamps of South Sudan, Uganda, Eastern Democratic Republic of Congo and Zambia.

The shoebill is an interesting bird whose physical look can make you feel like you are seeing a statue - until it graceful dives into the waters and comes up with a struggling fish to eat.

Destruction of swamps and marshes has led to the declining number of shoebills but if you get a chance to see one in its natural environment, it will be like looking at a meditating bird.