The African rock python is the biggest snake of all African serpents. While rare to meet on most safari drives, the experience is quite spectacular.

This relative of the anaconda can grow to more than 20 feet in length and is capable of swallowing a whole antelope, goat or young human.

In this article, we will look at some facts that make these pythons very interesting snakes. We'll look at what they eat, how they hunt, their sizes and whether they are in danger, among other facts.

1. Where Do African Rock Pythons 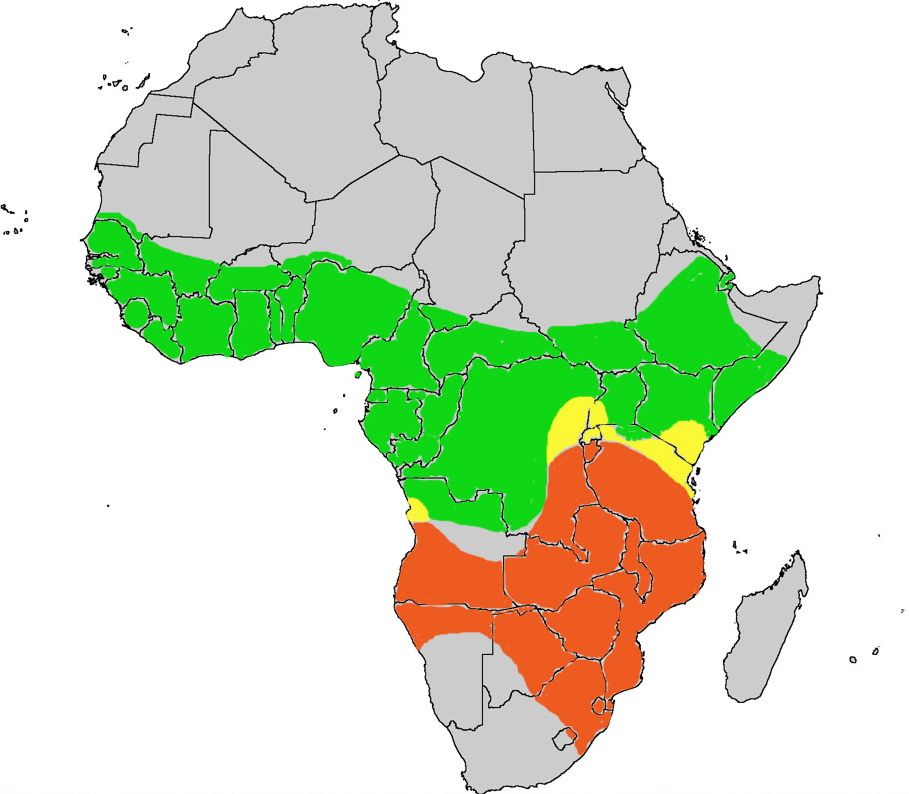 African rock pythons are found in most of sub-Saharan Africa in a wide variety of environments. They live in forests, savannah, semidesert as well as rocky areas.

In the various environments, they stay near permanent water bodies like the edges of swamps, lakes and rivers. They avoid the driest deserts and cold mountain elevations.

African rock pythons can be found in all the countries from Senegal to Ethiopia and southward to Namibia and South Africa.

African rock pythons were found in the Florida Everglades and are thought to be a very invasive species since it isn't their natural habitat.

The  African Rock python (Python Sebae Sebae) is at times referred to as the Central African rock python.

The Southern African Rock python (Python Sebae Natalensis) is slightly smaller in size and is found in areas of Souther Tanzania and south towards South Africa.

3. How Big Is An African Rock Python 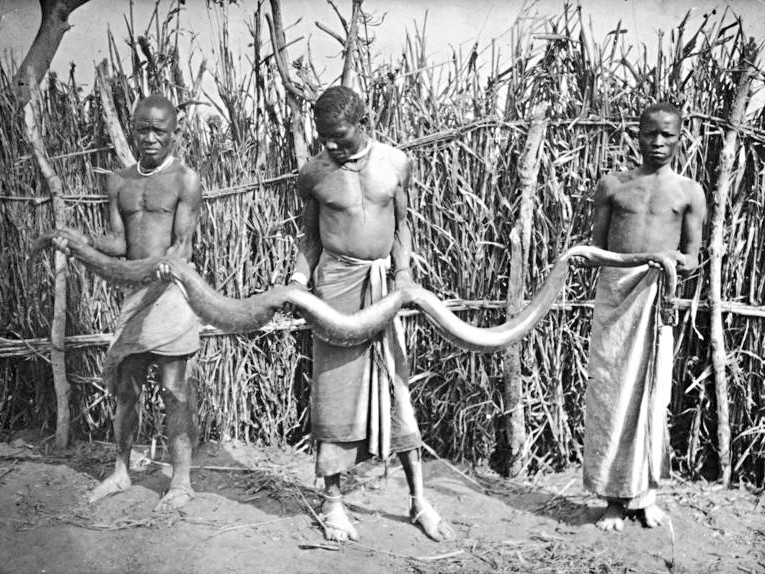 African rock pythons are the biggest snake in Africa and the 4th biggest in the world.

The average length on an African rock python is between 3 and 5 metres (9.8 to 16 feet) with reports of individuals reaching 7.5 metres (24.6 feet) in length.

4. What Do African Pythons Eat?

While it is rare, rock pythons can also kill and devour young cubs of predators such as lions, cheetahs, hyenas and leopards as well as the puppies of the African wild dog.

In areas with a human population, house rats, poultry, dogs and goats are also part of the python's diet.

5. How Much Does An African Rock Python Eat?

It is hard to tell the exact daily or weekly food consumption of a rock python (and most snakes). Big African rock pythons have been noted to kill and swallow-whole animals the size of a small goat or young antelope weigh between 10 to 25 kilograms. 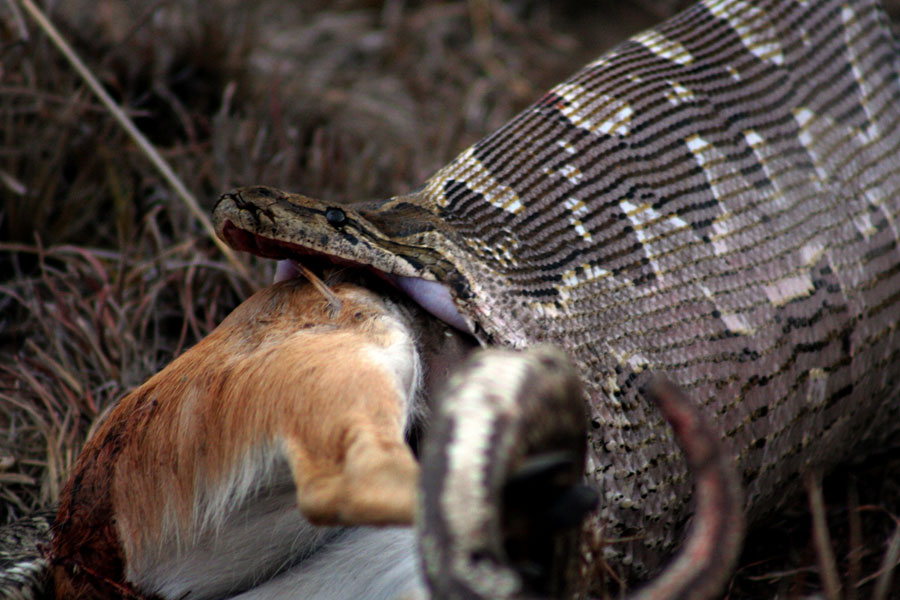 6. How Long Do Rock Pythons Go Without Food?

African rock pythons do not eat on a regular basis and can last for a long period of time without eating anything. The size of the snake and the size of the meal would determine how long it takes without needing food again.

Female pythons go through a dormant period of not feeding when they are nesting their eggs. A captive python was observed to have gone for 2.5 years without any food.

African rock pythons can and do eat humans. While this is rare, pythons do attack and eat humans especially young children of a smaller size.

The recorded attacks on humans are quite a few but we think this is because populated areas aren't a great habitat for rock pythons anyway.

In some areas, humans eat African Rock Pythons as well as other snakes. This varies with different cultures. Generally, this is regarded as "bushmeat" and sold in rural markets, especially in the Congo basin rural communities.

To some communities, a big python could be considered a delicacy.

Since snakes are not easy to track and hunt, the laws regarding poaching them are unclear in many areas, especially in cases where the python goes into the community.

While African rock pythons do not have venom, they will bite to defend themselves. Adult rock pythons have large sharp teeth with strong bites that can cause serious injury.

While Pythons are not easily seen on a safari in the wild, you should follow your guide and ranger's direction because you don't want to step closer to a hungry python.

10. Are Rock Pythons Good As Pets?

African rock pythons are not suitable pets for most people because of their big size and aggressive nature. Wild hatched pythons are even more aggressive than the captive hatched ones.

Having African rock pythons as pets required a high level of care and a permanent food source that should increases as the snake grows larger.

In 2017 a 2.4-metre female rock python kept as a pet in Hampshire England was found to have killed its owner. Here is the BBC Story

11. How Do Pythons Reproduce? 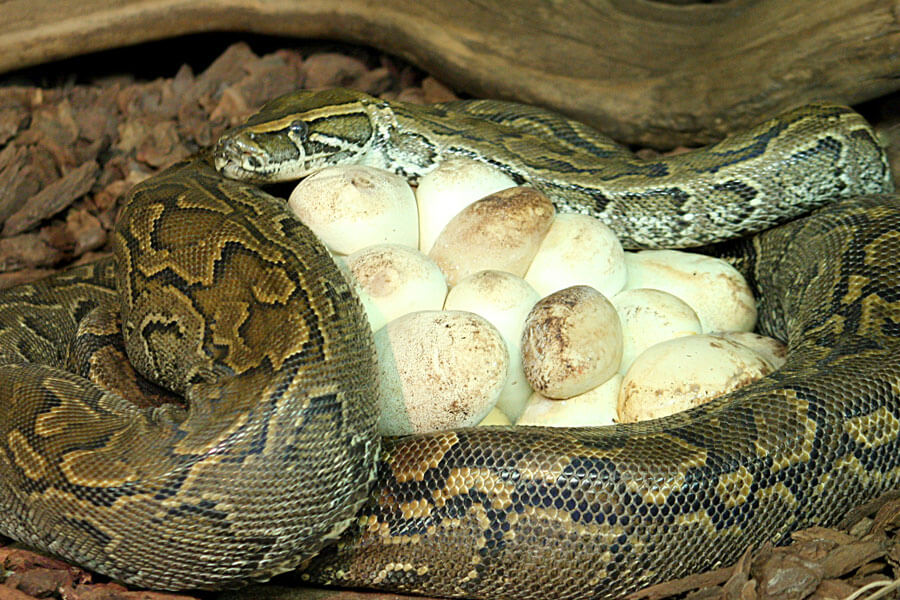 African rock pythons reproduce by laying 20 to 100 elongated, hard-shell eggs in a cave or burrow.

Reproduction often occurs between November and March and the eggs hatch after 90 days. Unlike other snakes, the female rock python exhibits an extreme level of maternal care and protects the eggs, and later hatchlings from predators.

Hatchlings of African Rock pythons measure between 45 and 60 centimetres (1.5 to 2 feet) in length.

12. Are Pythons Social With Each Other?

As with most snakes, African rock pythons are fairly solitary and only seek out each other when it is breeding season.

Female rock pythons will at times protect the hatchlings for a few weeks but usually, the hatchlings go on their way as soon as they are out of the eggs.

Unless it is breeding season, you will hardly see 2 pythons at the same time.

13. Do African Rock Pythons Have Predators?

African rock pythons have few predators because of their big size. Apart from humans, pythons can be killed by crocodiles, hyenas and wild dogs.

African rock pythons are most vulnerable to predators after swallowing prey when they are unable to move or defend themselves.

14. How Do African Pythons Hunt? 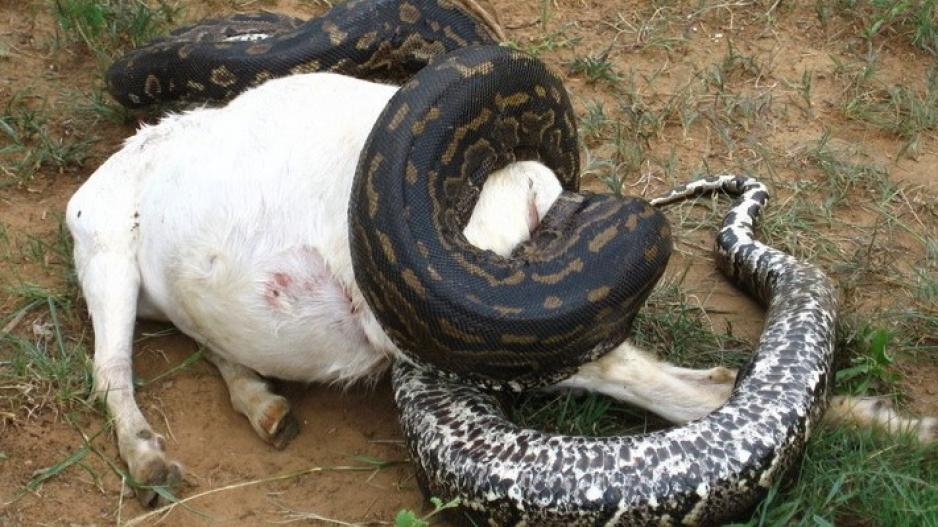 African rock pythons hunt by ambushing and surprising their prey. They patiently wait for their target animal to wander so close in their territory and then strike with a bite with their teeth before proceeding to coil around the struggling animal.

By constricting the prey every time it breathes out, the animal eventually dies from cardiac arrest.

While many people think that a python crushes its victim's bones, that only happens for smaller prey but the main method is constriction which limits breathing and leads to either suffocation or heart failure. 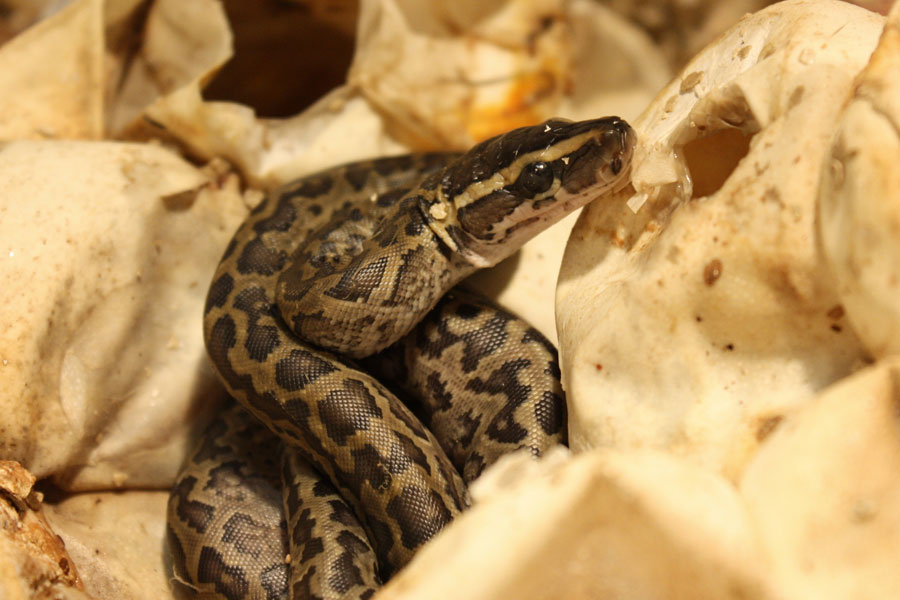 While it is hard to get correct data on pythons in the wild, it is estimated that the African rock python can live for 30 years in the wild.

African rock pythons are good swimmers and often stay underwater for a long period waiting to sneak up on their prey. This is why they prefer to stay closer to water sources because the swimming ability helps in their hunting or escaping danger.

17. How Are African Pythons Different From Anacondas?

The two main differences between African rock pythons and Anacondas are their size and habitat.

ii). The African rock python is found in Africa yet anacondas are native to South America.

iii). While they both like water, African pythons like around water bodies in various hot climates like savannah and semi-arid. Anacondas rely on the water much more and do their hunting, nesting and living in water or around water 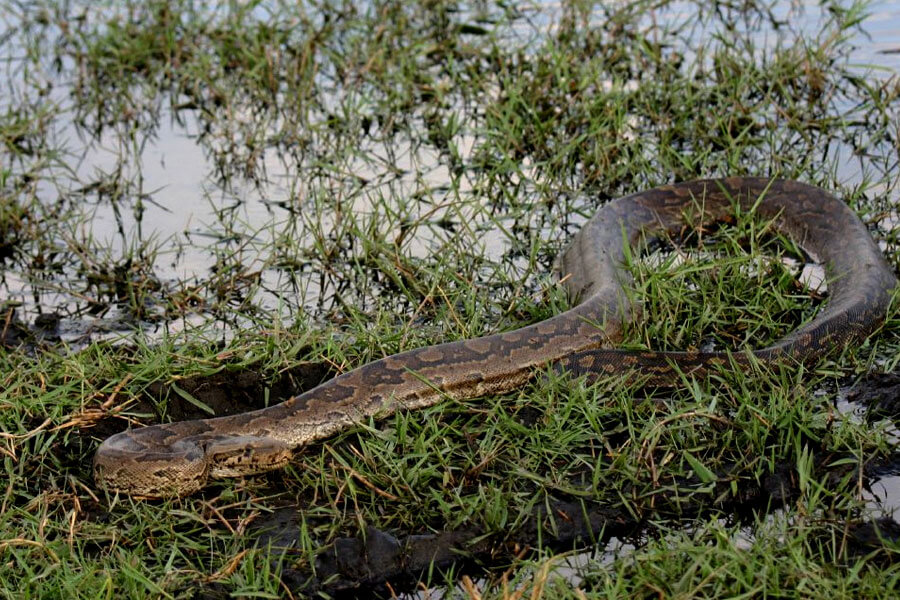 18. Are African Pythons In Danger

According to the International Union for the Conservation of Nature (IUCN), African Rock Pythons are classified as Near Threatened, with decreasing populations.

The major threat to these rock pythons is habitat loss to agriculture, urban development and other human economic activities.

Much as it is not at a high risk of extinction, The African rock python is listed under the CITES (Convention of Internation Trade in Endangered Species) Appendix II as needing some protection from over-collection of pets and skins.

As the biggest snake in the whole of Africa, seeing the African rock python can be quite a spectacular sight - especially if you can find it trying to swallow an animal whole. As with most snakes, it is easier to see them in a captive environment than while on a wild safari.

While the human relationship with snakes is generally not great, pythons and other snakes have a role to play in maintaining the integrity of their local ecosystems.

Their ability to adapt is incredible, but also harmful as witnessed by their invasive impact in the Florida Everglades.

We hope you found this article on African rock pythons interesting and informative. Cheers.